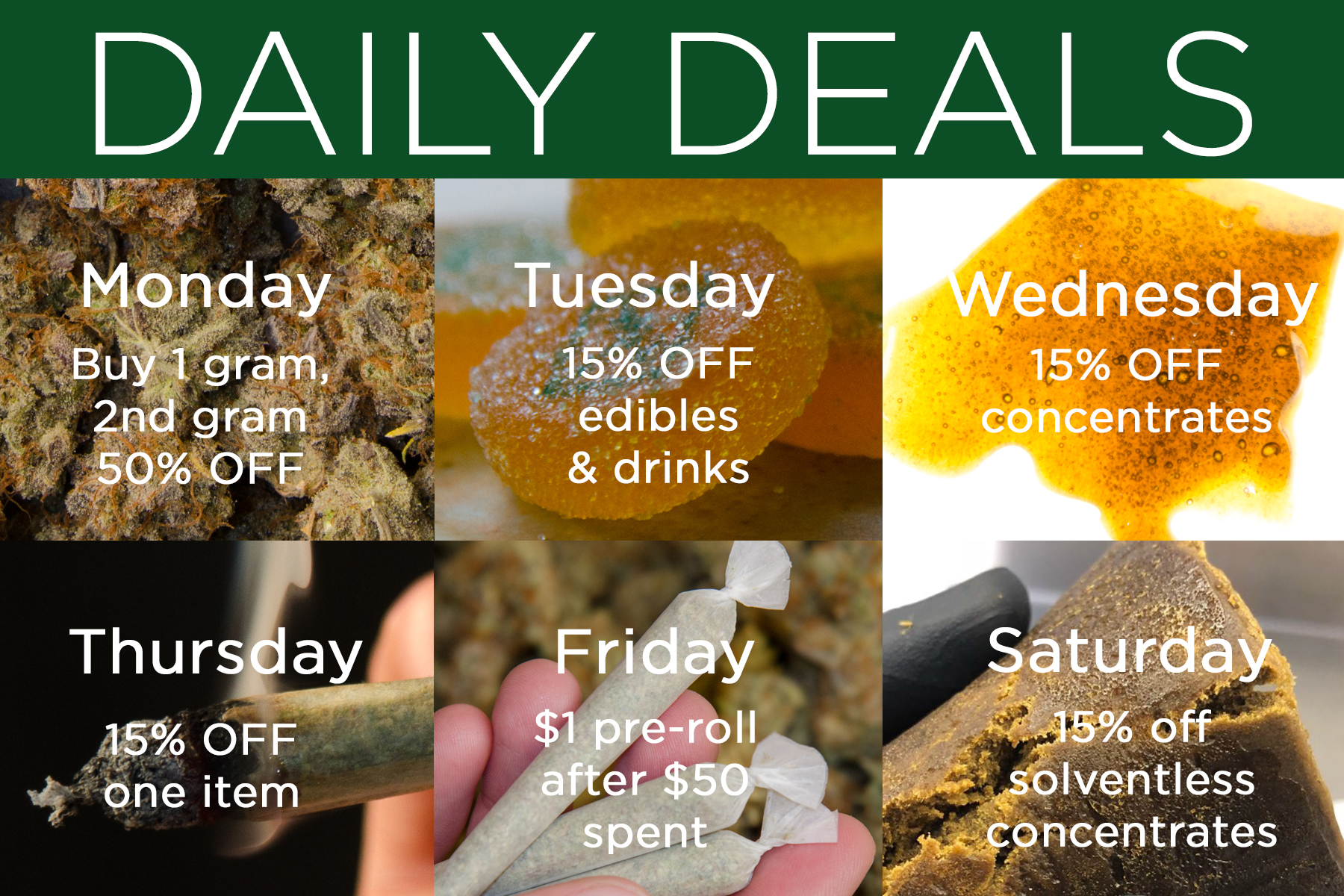 I love Taco Tuesday. Actually, in the year 2020, Cinco De Mayo falls on a Taco Tuesday, and my calendar is already marked because that day is gunna be epic. But if I’m being honest, I think I like “Taco Tuesday” for the two “tee” sounds instead of the “taco” or the “Tuesday” part, because I’m not really a fan of either one when they’re apart.

My point here is that most day-specific deals are fun because the alliteration makes them sound so cool: we sell a half-priced gram on “Marvelous Monday” when you buy one at full price; “Waxy Wednesday” gets you fifteen percent off shatter and a few other products; “Thankful Thursday” lets you pick any one item to discount by fifteen percent. See what I mean? They’re catchy and fun and easy to remember, just like the rest of our daily deals that you can read about HERE.

However, the weekends have been neglected by The Greenery, and we apologize. Saturdays and Sundays have always been crazy enough given that our cannabis really is the best in town, so we’ve been afraid to add to the mayhem by throwing a discount into the mix. But you know what? Our Hash Factory makes solventless hashes, Saturday is a perfect day to smoke said hashes, and “Solventless Saturday” sounds super-cool thanks to all the susurrations. I might even like it better than taco Tuesday, but that kind of decision takes time to make.

Anyway, as of today (5/12/18), The Greenery will be selling our house-made solventless concentrates for fifteen percent off, and we’ll do so every Saturday because the weekends deserve discounts too, as does anyone who appreciates the purity of a traditional hash. And just in case you don’t know what qualifies as a true “solventless” hash, here’s the list:

I swear to you that the five hashes we’re discounting this Saturday and every Saturday are some of the best products available anywhere. In fact, the hashes we make are so good that they’re sold in about ten percent of all the dispensaries in Colorado, and it only took us a few months on the wholesale market to get there (seriously, look at our map HERE). Isn’t that awesome? Now you can buy some of the best hash in the world directly from the people who make it, and you can do so right here in this tiny mountain town for a price that’s better than you’ll find anywhere else.

So, come see Your Best Buds at our Durango dispensary on 208 Parker Avenue this Saturday for our solventless special. We’re open from ten to nine-thirty, and our hash will be discounted all day just for you, which is way better than tacos on Tuesday, now that I think about it.