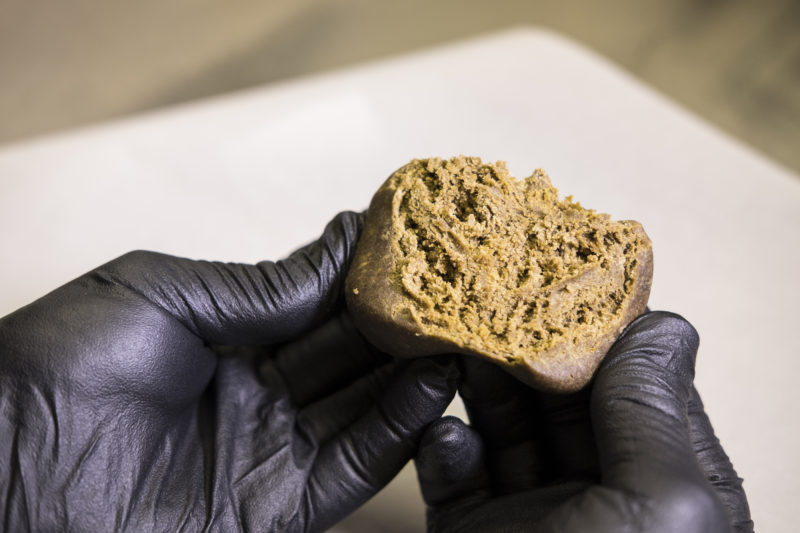 The Berbers are a people of ancient Arab stock—they’ve lived in the mountainous Rif region of Morocco for as long as records have been kept. Their eyes and hair are deep brown, their traditions are exotic, and they paint their houses and streets blue to mirror the sky, to be reminded always of a god living above. And they make hashish, just as they always have, because it’s a part of Moroccan life.

In the Rif, the soil is red and rich, and the air smells salty because the Mediterranean Sea starts where the mountains end. And hidden in the highlands are terraced hills covered with flowering marijuana. The Berber men tend their crop until it’s time to harvest, and then they reap their fields the way their fathers taught them to. The harvested marijuana is set aside to cure for a month, and then the flower is trimmed from the stalk. The green bud is ground gently, and then placed on a silk drum—the silk acts as a filter: the pollen falls through while the plant matter stays trapped on the surface. The Berber men cover the flower with a tarp, and then start beating on it rhythmically with bamboo canes; they call this “making music.” When the hash-song is done, the men uncover the beaten flower and throw it away. They take the silk head from the drum and look inside; the brittle trichomes that filtered through the silk sit in the drum’s bottom. Light brown, pungent, intoxicating.

The men press the powdery hash by hand, heating and kneading it gently, and they smile as their Moroccan hash darkens. They roll it into balls, keeping the best for themselves, and then they send their hash out into the world; these Berber men make half the world’s supply. But oddly enough, marijuana is illegal in Morocco. Lenience is given to the Berber tribes because it’s easier than policing them, but once their hash leaves the mountains like snowmelt flowing downhill, it loses its protection. It’s coveted and fought over just like anything else that makes you feel good, and it’s always been ridiculously hard to come by in the States. I’ve only had authentic Moroccan hash twice in my life—I could tell by the tribal stamp pressed into the bricks I bought—and I didn’t want to think too much about how I got what I got, because most of this hash is smuggled out of Morocco in a very… personal way. But each time I smoked it, I loved the feeling Moroccan Hash gave me, and after each time I ran out, my smile turned upside-down.

But that’s over: now, The Greenery Hash Factory is making their own Moroccan Hash, and we’re selling it at The Greenery for thirty-five bucks a gram. And the craziest part is that the stuff we’re making is better than the stuff I’ve smoked before; maybe we should call it “Durangan Hash” and smuggle it into Morocco so they can see what they’ve been doing wrong for centuries. For one, we use the best marijuana in Colorado to make our hash—our cannabis is grown in a controlled environment with living soil by a badass Master Grower, not out in the wind and rain of a Moroccan mountainside (and we don’t have to worry about goats eating our pot, which is nice).

Secondly, we use modern technology to make our “music”; quality control is much easier to achieve when you’re using a dry-sift machine instead of bamboo canes. And when you do everything scientifically, from using an exact heat to caramelize the hash to testing the hash in a modern laboratory, you end up with a superior product. Our most recent batch of Moroccan Hash is simply awesome: we made it from Skunk #1 flower, and the THC came in at 65%, the CBD came in at 1.3%, and the CBN came in at 2.3%. Today, when most marijuana concentrates are made using a chemical extraction process, these numbers are exciting because we did it the old-school way, naturally.

But in the end, it’s the experience that counts, not the numbers or the three-letter-acronyms, and I swear to you that to smoke our hash is to know perfection. The flavor is deep and musky, like a velvety dark chocolate or a fragrant black tea. The high is focused and intense, with profound relaxation and a centered calm. It’s the high I’ve been looking for through the years since I held those tribal-stamped bricks of the real deal, but taken to another level in the hands of our hash craftsmen. So, come in to our dispensary and ask one of our affable budtenders to show you what I’m talking about; you can smell it and see it for yourself. From now on, we’re offering this Moroccan Hash to Durango and our neighbors because it’s just better than what has been offered before—that’s what you’ve come to expect from Your Best Buds, and that’s what you’ll get if you try our house-made Moroccan Hash.