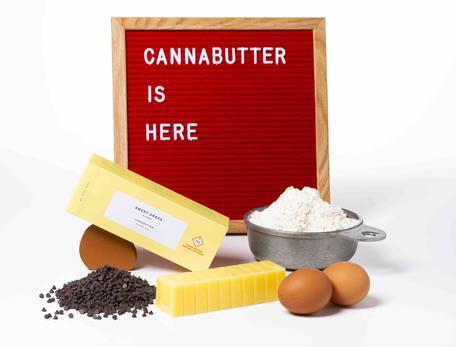 We have cannabutter! I know I usually open these blogs with an artsy introduction or whatever, but I skipped it this week because I’m inexplicably excited by butter that gets you high. I mean, isn’t it crazy? It might just be because I’m old, but it’s mind-blowing to think that you can walk into a store (that’s us) and buy a stick of butter that’s infused with cannabis. Each stick is marked into ten, 10mg squares, and one of them is perfectly sized for your morning toast or an evening dinner roll. This stuff is ideal for baking; it’s one of the most versatile edibles we sell; it comes in a child-resistant package that fits perfectly in the butter compartment in your fridge.

And if you remember my blog about how lipid-soluble edibles work (if not, read it HERE), you know that it’s important to consume fats alongside your edibles for efficacy, so cannabutter is perfect because the cannabis and fats are already living together in the butter. This is the original, old-school cannabis edible, and it’s definitely a staff favorite, so next time you’re shopping for an edible, try thinking outside the gummy and chose a box of butter.

But if “old-school” isn’t your thing and you want to try the newest “it” edible on our shelves, look no further than our Nitro Coffee. You read that correctly. We’re now selling single-serving, 10mg THC cans of nitrogen-infused coffee for that foamy goodness and smooth mouthfeel. This coffee is non-GMO, gluten-free, and vegan, so it’s perfect for the new-age nitro coffee type (just make sure to read the directions because opening a child-resistant, pressurized can of coffee is interesting).

So, what is “CBN” or “CBG”? Well, the former is “cannabinol,” and it purportedly makes you tired, so it may act like a sleep aid. But please remember, I’m not a doctor, so I am in no way qualified to give you medical advice, and I’m not a scientist, so I haven’t studied these cannabinoids enough to tell you definitively what they can or cannot do for you. It’s important to consult your primary care physician if you’d like to try this or that cannabinoid for this or that medical ailment, and it’s equally important to know that sufficient studies on these cannabinoids have not been completed given that weed is illegal federally, so nobody knows for sure what they can do. That’s why it’s important to take these newly isolated cannabinoids with a grain of salt and a skeptical mind. For example, if you’re looking for a good night’s sleep, try a CBN edible (or the vape I’ll tell you about shortly), but really pay attention to how it makes you feel. If you’re tired, maybe it worked, and maybe you should try it again. If you’re not, it didn’t, so don’t. Get it? Personal “trial and error” is the only way to see through all the murky nonsense that surrounds legal weed.

Anyway… back on track. Long story short, I’ve already told you that CBN might act like a sleep aid, but up until now, we’ve sold it only in edible form. And as you know, edibles (even the fast-acting ones) take a while to kick in. Vapes, however, are nearly instant. So, if you’re trying to fall asleep quickly, or if you wake up intermittently throughout the night and you need something to knock you back out, try this new CBN vape from O.pen. Who knows? It could be exactly what you’ve been looking for.

Now that I think about it, I’m not sure I’ve ever told you about CBG, or “cannabigerol,” even though we’re already selling an edible containing it (it’s the Pear flavor of Wyld gummy, which is just awesome/delicious). Anyway, CBG is often referred to as “the mother of all cannabinoids” because it’s the first one to show up in immature cannabis plants, and it’s the one from which most other cannabinoids eventually develop. As to what this stuff does, again, nobody is 100% sure (and if they say they are, they’re lying), but it’s reported to be the feel-good cannabinoid. Theoretically, when CBG binds to the receptors in your endocannabinoid system, it may strengthen the function of anandamide, which is a neurotransmitter associated with pleasure.

Personally, getting high makes me happy, so it’s the THC to thank, not CBG, but extra giggles are never bad. So, if you have a frown that you’d like to turn upside-down, and you’d like to try cannabis to do so, maybe this stuff is for you. We have it in the nearly-instant vaporizer option I’ve been talking about, and the tasty, pear-flavored gummy version I mentioned earlier, so it’s easy to try cannabigerol no matter your consumption preference.

However, the theme I’m really trying to get across here is that if it’s cannabis-related and it’s new, we have it, so if you like new and exciting things, come see us at 208 Parker Avenue, or order online HERE. The Greenery has long been the best recreational cannabis dispensary in Durango in that we intentionally do our best to stay on the forefront of new marijuana products even though we’re tucked away in Bodo Park here in a tiny Colorado mountain town. We always want to make sure our local community has access to the newest and greatest cannabis innovations available across the industry, because We’re Your Best Buds!