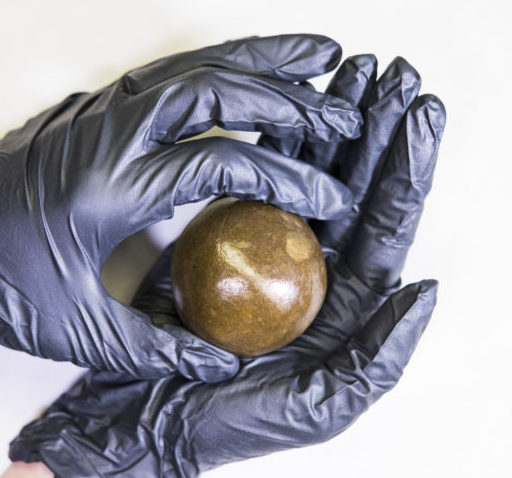 I want you to picture a naked Russian man standing next to a horse without a saddle (I promise this has something to do with pot, so hang in there). He’s in the Chu Valley, right between Kazakhstan and Kyrgyzstan, and it’s a nice day. The grasslands around him are flat and verdant—in fact, he’s standing on the border of a large marijuana forest where the plants are ten feet tall. He’s not alone, but everyone is freshly bathed and naked, just like he is.

The leaves and buds whip the Russians’ bodies and their horses, and soon, everyone is covered with a thick coating of “kief,” which is a combination of trichome heads and plant matter (all the crystal-goodness that covers ripe marijuana). The group of people, some running and some riding, methodically trample the entire marijuana field so they can collect as much kief as possible, and then they ride or walk back to camp, singing and laughing. Once there, the naked, dichka-covered Russians stand on pieces of canvas, and then different Russians (fully dressed ones) use wooden tools to scrape all the kief off their naked friends and their horses. The mixture of kief and sweat is then pressed into bricks and sundried into Russian Hashish, which they call “Plastilin.” And yes, the grossness of this story makes it a tad difficult to believe, but you can read a corroborating article HERE (but as a tip, do not google “naked Russian hash making” on your company computer like I just did, because the images you’ll find have nothing to do with marijuana). Crazy, right?

This has been going on for as long as dichka has been growing in the Chu valley, and to this day, plastilin is still one of the most sought-after forms of hashish in the world. And the name is interesting, now that I think about it, because once it’s dried, this form of hashish looks and feels just like plasticine clay (the colorful stuff you used to play with in preschool). Granted, most of the reason people search for this stuff is that it’s so rare, so if it were widely available, I doubt people would crave it because hash without human and horse sweat is undoubtably better. And that’s where we come in given that we operate our very own Hash Factory that specializes in making international hashish.

But don’t worry, we won’t be making Russian Hash any time soon because I doubt Colorado would let us do anything naked, and we don’t own any horses. Frankly, I just wanted to tell you about this stuff to prove that we know the down-and-dirty about foreign hashes, and to point out that the international hashes that we do make aren’t nearly as gross. You can read about our Moroccan hash HERE and our Lebanese hash HERE, and you’ll be delighted to know that you can try either one without finding a single horsehair in your pipe. You’re welcome.

That being said, all the blogs I’ve written in the past about our traditional hashes have steered you right here to Durango, Colorado, which is the source for classic concentrates in the Southwest. But did you know that you don’t have to come to Durango to try our hashish? In the past, I imagine it’s been frustrating for you out-of-towners to read about our hash without being able to try it, and for that, I apologize. It’s taken me this long to realize I’ve never told you that our traditional hash is available in over 160 dispensaries across Colorado, and all you have to do to find the closest one is look at our hash-finder map that you can see HERE. Isn’t that wonderful?

The reason that our hashes are so much better than everything else out there is that we don’t use hydrocarbons to make our products; we don’t need butane to make concentrates like everyone else because the old-school way is just fine. We tumble our pot and collect the kief, and then we bake it or press it to make the most wholistic form of hashish you can imagine, and our processes stand the test of time because people have been making hash just like we do for thousands of years. So, come see us, or click on the map to go see one of our friends, because international hashes are wonderful, and because We’re Your Best Buds!