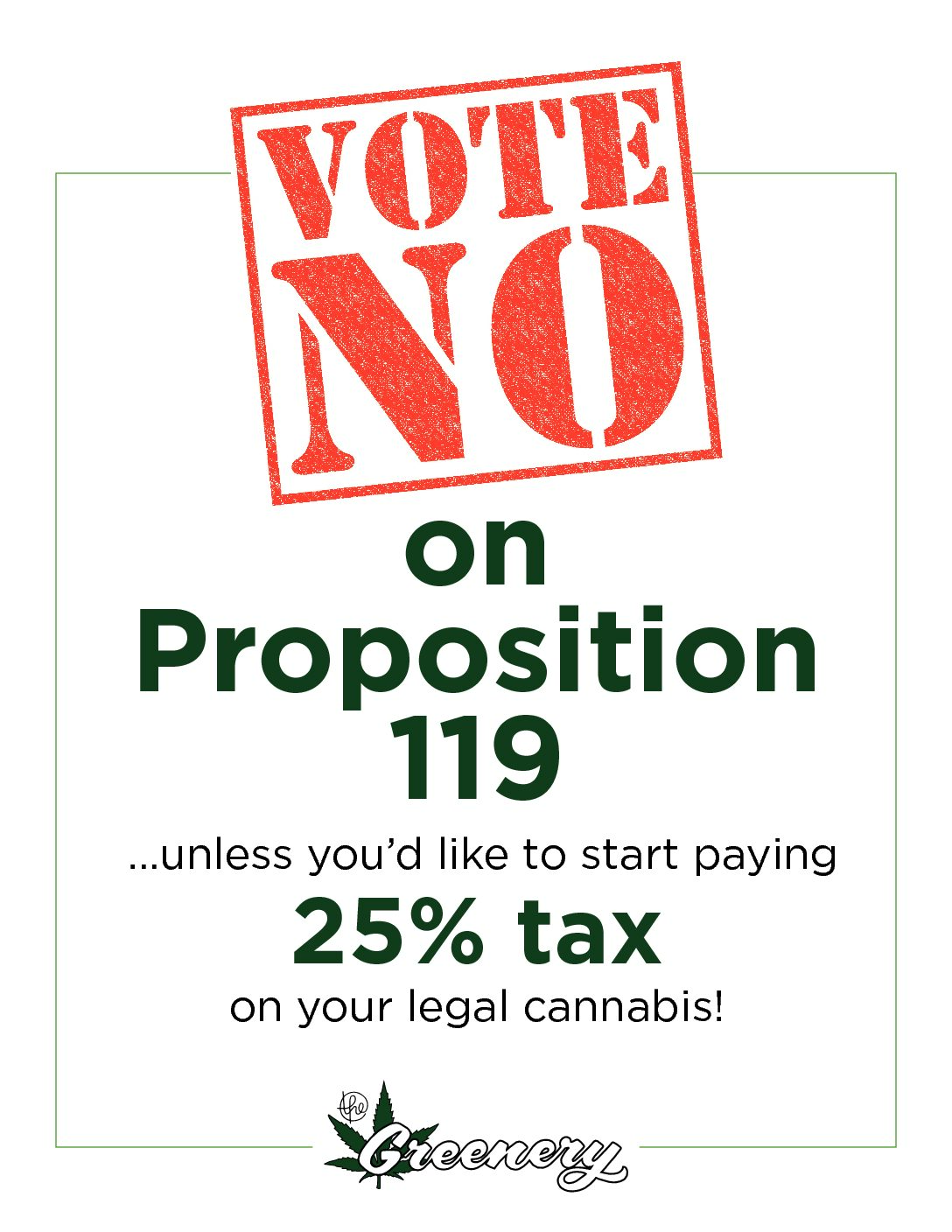 How to vote on Proposition 119

Unless you’d like to start paying a 25% tax on legal marijuana, you need to vote no. Actually, you need to stand on a street corner holding a big sign that says “vote no on Proposition 119” because it’s extortionate.

Do you know what’s hilarious? Way back when Amendment 64 was adopted, thereby creating the legal cannabis market here in Colorado, it said that marijuana would be “taxed in a manner similar to alcohol,” but guess what? That little tidbit was straight-up ignored by our politicians (which, coincidentally, is why nobody likes politicians).

Currently, alcohol is taxed at 8.4% here in Durango, and Marijuana is taxed at a 20.5% rate, which is two and a half times higher.

Granted, I have a degree in English, so I might have a better grasp on basic definitions than politicians, but still, “two and a half times” is nowhere near “similar,” so the madness needs to stop; that brings us to Proposition 119. If this initiative were to pass, the tax rate you pay for legal, recreational marijuana would slowly climb over a period of three years from 20.5% to 25.5%, which is insane. We’d move even further away from the “similarity” that was supposed to exist between marijuana and alcohol tax, and we’d once again be asking legal, adult marijuana smokers to pay more than their fair share. It’s not cool, and it’s not American, no matter which side of the aisle you sit.

The money from this tax would go to after-school programs for underprivileged students, and that’s the rub. It makes you sound like Ebenezer Scrooge if you stand on a soapbox and demand that more money not be given to underprivileged students, but I promise that’s not the case. If you read the fine print of this initiative, if we pass it, the state will also take $22 million out of our state land trust to fund the bill initially, and that money would otherwise go to general school funding. So, we’d be taking from kids to give to kids.

Look. For the record, I have children. The people who own this dispensary have children. We do everything in our lives for our children, and we care about kids in general. But disproportionately hurting our industry isn’t the way to help them. Just think about our underprivileged customers: should we really make the unemployed veterans who come in here for relief pay more for their cannabis? What about the cancer patients who come in trying to stimulate their appetites, or the ones who are trying to make the horrors of chemotherapy more bearable with weed? Are these really the people who should bear the burden of higher tax rates while family-ruining alcohol escapes unscathed?

And here comes the most ridiculous part: the proponents of Proposition 119 say it’d generate over $137 million annually, but that’s a lie. It would only generate that much money if people kept purchasing marijuana at the rate they did last year, which simply will not happen if we make it all 5% more expensive. One of the reasons for this is that the illegal cannabis market here in Colorado is still alive and well, and if the legal stuff gets taxed more, the illegal stuff will take more of the market share. It’s all just simple, infallible logic (you know, the kind not possessed by your average, greedy, baby-kissing politician).

For real, if all that you just read sounded a bit vitriolic, I apologize. It’s just that most of us in this over-regulated, over-taxed industry have become jaded. In fact, I wrote THIS article over four years ago the last time our industry was put into the crosshairs of avarice, and nothing has changed since then. Cannabis is still seen as a newly legalized, unnecessary thing by the old guard, and whenever a financial shortcoming is discovered, the powers that be turn once again to cannabis taxes to bridge the gap without even looking at other revenue sources such as an increased alcohol tax. It sucks, and we need your help fighting it.

So, please, please, please, vote “no” on Proposition 119. We don’t want to charge you more than we already do just to come buy some legal weed that’s already over-taxed. We want to keep things fair and legal, and we want to continue providing you with the same affordable quality you’ve become accustomed to here at The Greenery, because We’re Your Best Buds!