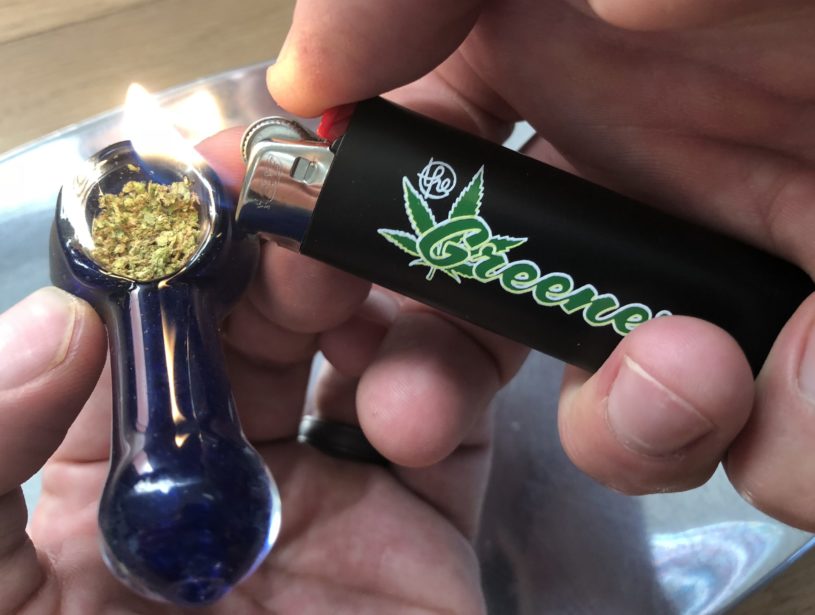 Smoking pot is a social thing. It breaks the ice, it forms bonds and friendships, it reminds us that being together is better than being apart. There’s simply something about cannabis culture that’s harmonious and gregarious, peace-loving and friendly, and that’s why I love this plant so much. Think about it: when alcohol comes to mind, so does belligerence and abandon, but when pot comes to mind, you picture calm smiles and companionship. But now that marijuana is becoming more mainstream, our culture is changing. Altria (the company that makes Marlboro cigarettes) just invested billions into cannabis, the companies that make Corona and Heineken are already producing cannabis-infused beer, and new stories of corporate acquisitions in the cannabis industry are popping up daily. Pot is becoming a business as opposed to a pleasant secret.

So, what’s that going to do? Is weed going to morph into a pedestrian thing just like all the other stuff you can buy in a corner store? Is the communal, loving culture that’s synonymous with cannabis going to change into blatant consumerism once weed is grown and sold by the same companies that pedal cigarettes? I don’t know. But I do know that the only way to preserve something wonderful is to talk about it and educate the masses—the only way to keep something communal is to discuss the way it brings us together and how to keep it that way. So, this week, I decided to write about how to smoke with other people in a way that preserves the culture that got us here in the first place. If you heed the following rules, you’ll avoid making a flower faux pas, and when you’re smoking with other people, you’ll come across as an OG who cares what pot is all about…

1.) Bring some if you’re invited. Remember, sharing is caring, and that’s what it’s all about. If a buddy invites you to a smoke session, bring some pot. Your buddy called you to be together, not just to get you high, so keep things equal by contributing.

2.) Pay back if you cannot contribute. If you don’t have anything to contribute to a smoke session, take a mental note, because I guarantee that whoever gets you high will remember it, and if you always show up emptyhanded, the invites will start to dwindle. It’s commonsense: if someone smokes you out, you should smoke him or her out.

3.) Think about the group, not yourself; doing so reinforces the sense of community that makes getting high together so wonderful. There are easy ways to do this:

4.) If you load the bowl, offer the first hit to someone else. The first hit, or the “green” hit, is always the most flavorful, so offering it to someone else is tantamount to offering a gift, and that’s exactly the type of thing that brings people together. Of course, there’s an exception to every rule: if you’re smoking a joint or blunt, and you rolled it, it’s okay to light it yourself and take the first hit (it’s the little reward that comes from taking the time to roll a joint).

5.) If someone offers you the first hit, don’t burn all the green in the bowl. Instead, apply the flame to the side of the bowl and burn only a little of the green so the next person in the circle gets some flavor, too. This is called taking a “hippy hit,” and hippies are all about love, which is important.

6.) Keep passing the pipe or joint to the left. If you’re a regular smoker, what I’m about to tell you will sound obscenely obvious, so please remember that I’m writing this for everyone. When people get together to smoke, they form a circle, and it’s important to pass the pipe to your left. Snoop Dog raps about this regularly, and other songs like “Pass the Dutchie on the Lefthand Side” keep the tradition alive, but there’s a reason for it you might not know. Most people are righthanded, so if you pass to your left, you’re putting the pipe directly into your neighbor’s dominant hand, so it’s easier for them to take the pot. True, if you pass to your right, it’s easier because you don’t have to cross your arm to your left, but remember, it’s not about you. It’s about the group, and it needs to stay that way.

7.) Don’t sober shame. Remember, smoking pot in a social setting is about being inclusive. If someone is standing in your circle, and he or she doesn’t want to smoke, don’t give that individual any crap for his or her choice. He or she belongs in the group just as much as you do because being friendly is more important than getting high. But if you’re that person who prefers to stay sober, take the pipe when it’s handed to you and then pass it along instead of holding up your hands and saying “no.” If you’re standing in a circle, don’t break it.

8.) Keep the pipe or joint moving. Let’s be honest: people are intrinsically self-centered, and we all like to be the center of attention. And when a pipe is handed to you, the entire circle’s attention will shift to you. Some people will revel in the spotlight, and they’ll stand there holding the pipe and start talking because everyone is watching. Don’t be that guy; nobody likes that guy. We’re watching you because you’re holding the pot, not because what you’re saying is so interesting. So, take a damn hit and then pass the pipe because we want it, too! If you can’t tell, this one is my personal pet peeve, and it’s usually everyone else’s as well. Holding the pipe and talking is called “camping” (because you’re making the pot stay in one place), and people will usually drop hints like, “hey, you plan on pitching a tent?” Or, they’ll tell you not to “bogart the pot,” because Humphry Bogart always had an unlit cigarette hanging out of his mouth. Don’t camp, don’t bogart, and we’ll all get along.

9.) Don’t slobber on the pipe. There are all sorts of derogatory and disgusting terms for this that I’m going to omit from this blog, but for the love of all things holy, don’t get your spit all over the pipe; there’s nothing worse than a wet hit. If you’re a fan of using too much Chapstick, or you notice that you slobbered the pipe inadvertently, wipe the mouthpiece discreetly on your shirt before passing the pipe to your left.

10.) Let the circle know if you’re sick. For real, the group’s health is more important than your high. If you’re sick, don’t smoke. Or, better yet, bring your own pipe or joint and let it be well-known as to why you’re not sharing. People will thank you for it, and it’s the kind thing to do, especially since more and more people are smoking now and quite a few of us have healthy kids at home to worry about.

11.) Don’t pass an empty bowl. There’s nothing more disappointing than trying to take a hit and not getting one, so if you take the last hit, announce to the group that the “bowl is cashed.” And if you’re contributing to the circle, go ahead and load a new bowl. In this scenario, it’s okay to take the green hit yourself so you don’t miss out on the rotation, but remember the hippy hit.

12.) Don’t “chaz the banger,” or “crust the nail.” Yeah, I gripe about pot becoming big business, but there are some benefits that stem from all the progression, such as the availability of new-school dabs. And with dabs, there comes a whole new litany of rules, but I’ll just list two of them and leave it at that. For one, when you offer someone else a dab, if you’re using your rig, it’s polite to heat the nail and apply the dab yourself while your friend hits. Doing so stresses the communal feel of getting high together, kind of like lighting someone else’s cigarette. But if you’re using someone else’s rig and dabs, the urge to get as high as possible off someone else’s stuff will kick in, and you might overheat the nail to get it as hot as possible to get a big hit: don’t do this. This move is selfish, which goes against the culture, but worse than that, it’ll “chaz” or “crust” the nail, which could make it break at worst, or make the next dab taste bad at best. Remember, think about other people.

See? There’s more to smoking pot than simply lighting it on fire and breathing in the smoke, and just about all of it has to do with getting along together as a group. It’s the keystone to our culture, and it’s important because if we don’t hang onto tradition, smoking pot could turn into something tawdry like taking a shot of cheap tequila at a dive bar. And this “culture” that I keep talking about is alive and well here in our Durango dispensary; we’ve built our business on it. We offer discounts to veterans and people with Colorado medical cards, because these people need it the most. We use living bugs in our grow to kill the bad bugs because we want to keep things as natural as possible. And we do everything we can to preserve the original, communal essence of the cannabis industry, because We’re Your Best Buds!