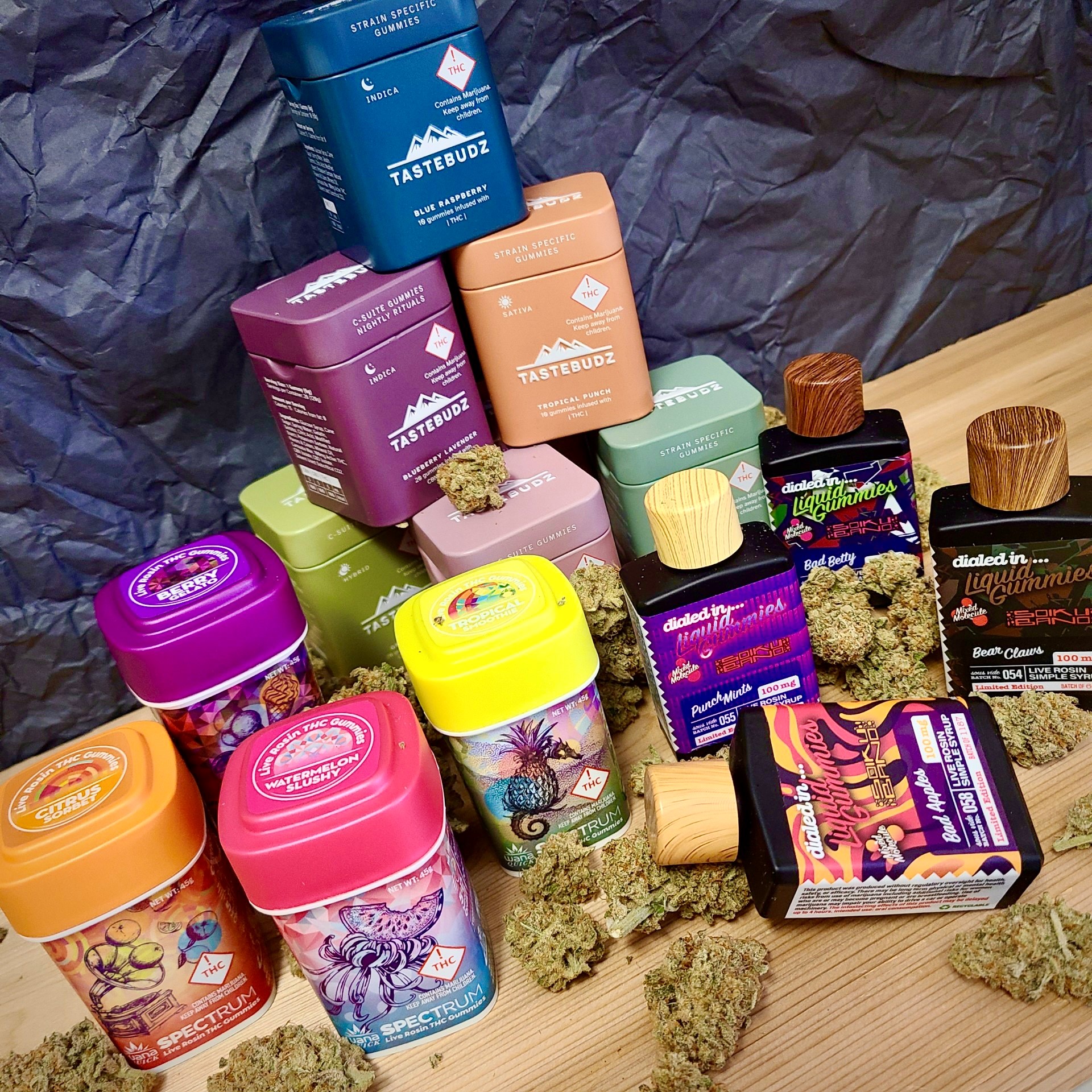 The Best Gummies in Durango

Gummies are king when it comes to cannabis. It’s a difficult thing to admit given that I’m such a purist who’s always loved flower over everything else, but the market has spoken. Here in the US, gummy sales topped one billion bucks in 2021, and 7 out of every 10 edibles that y’all bought was a gummy.

But three new things per the wild world of gummies hit our shelves within the last month, and I’d be failing you in my role as ganja guru if I didn’t tell you about them. So, here you go:

Liquid Gummies from Dialed In:

No, this isn’t just a clever marketing ploy to rebrand a tincture. It’s a simple syrup infused with first-press live rosin, and it’s a gamechanger. The newest craze in cannabis is the “THC Mocktail,” and to make one, all you need to do is find your favorite mocktail recipe, and then use these Liquid Gummies in place of the simple syrup: boom, you’re high and high-class.

This product is strain-specific, meaning it’s made from single-cultivar flower. And it’s important to remember that “live rosin” is completely solventless—it’s made only with heat, pressure, water, and weed—so it’s full-spectrum; the high you get with from this stuff is true to the plant.

That whole “true to the plant” thing makes for a perfect segue per this next new gummy debut. When something is “full-spectrum,” it means that it contains all the cannabinoids, flavonoids, and terpenes found in the flower from which it came.

Most gummies can’t make this claim because they’re infused with distillate, which contains only a few cannabinoids, so the high you get is usually potent, albeit uncomplex. When you get all the goodies from the ganja in a full-spectrum gummy, the high is closer to what you’d expect from smoking full flower; it’s called a “smoker’s high.”

Hold that thought for a second.

As you know, there are two different types of edibles: the traditional, lipid-soluble kind that takes a while to kick-in and but lasts a long time, and the newer, water-soluble sort that gets you high quickly but wears off much sooner. For a deeper explanation, read THIS blog from four years ago.

Okay… pick that thought back up. Because until recently, you had to make a choice: you could either buy a solventless, full-spectrum gummy like the lovely ones from Dialed In, or you could buy a fast-acting gummy from a different brand.

These new Spectrum gummies give you both: all the compounds extracted from the cannabis via a solventless press, terpenes included, are nonencapsulated, not just the cannabinoids, so all of it hits you quickly like an entourage-effect slap to the face. This full spectrum high comes complete, and it comes quick, and it doesn’t last as long compared to other edibles, so it really does feel like you smoked a joint only a few minutes after eating these things. I was skeptical at first, but these gummies made me a believer.

Yeah. These things have been around forever—in fact, I’d call them a cult classic. So why am I including them as the third “new and innovative” gummy in this lineup? Well, it’s because the good folk over at Taste Budz pivoted. They took everything we’ve been telling them since their founding in 2017 and recrafted their product. The only thing that stayed the same is the Superman-symbol shape of their gummies.

First, they negated the “my Taste Budz turn into a melted puddle when I leave them in the car for only a second” problem by reformulating their recipe. Then they made the internal bag compostable and switched to a sustainable tin as opposed to a plastic container to please the hippies. Then they did away with artificial flavors and colorings, and then finally, they switched to solventless live rosin instead of hydrocarbon-extracted distillate. Boom: it’s a brand-new gummy that’s nothing like its predecessor, and you need to retry these things immediately because they’re rad.

Lastly, as a word to the wise, yes, we grownups love gummies, but guess what? So do our kids. Cannabis gummies are nothing more than delicious confections that get you high, and they always come in brightly colored packaging because these brands are trying to stand out on our shelves, just like all the products you see at the supermarket. So, keep your cannabis gummies locked up and out of sight.

I’m sure there will be more to add in the coming months because the flow of new products hitting the market is just as liquid as the new gummies from Dialed In. So, if you’re one of the gummy-lovers who contributed to that billion-dollar haul last year, keep your eye on our gummy menu HERE for new additions. Because when it comes to the best marijuana gummies in Colorado, We’re Your Best Buds!