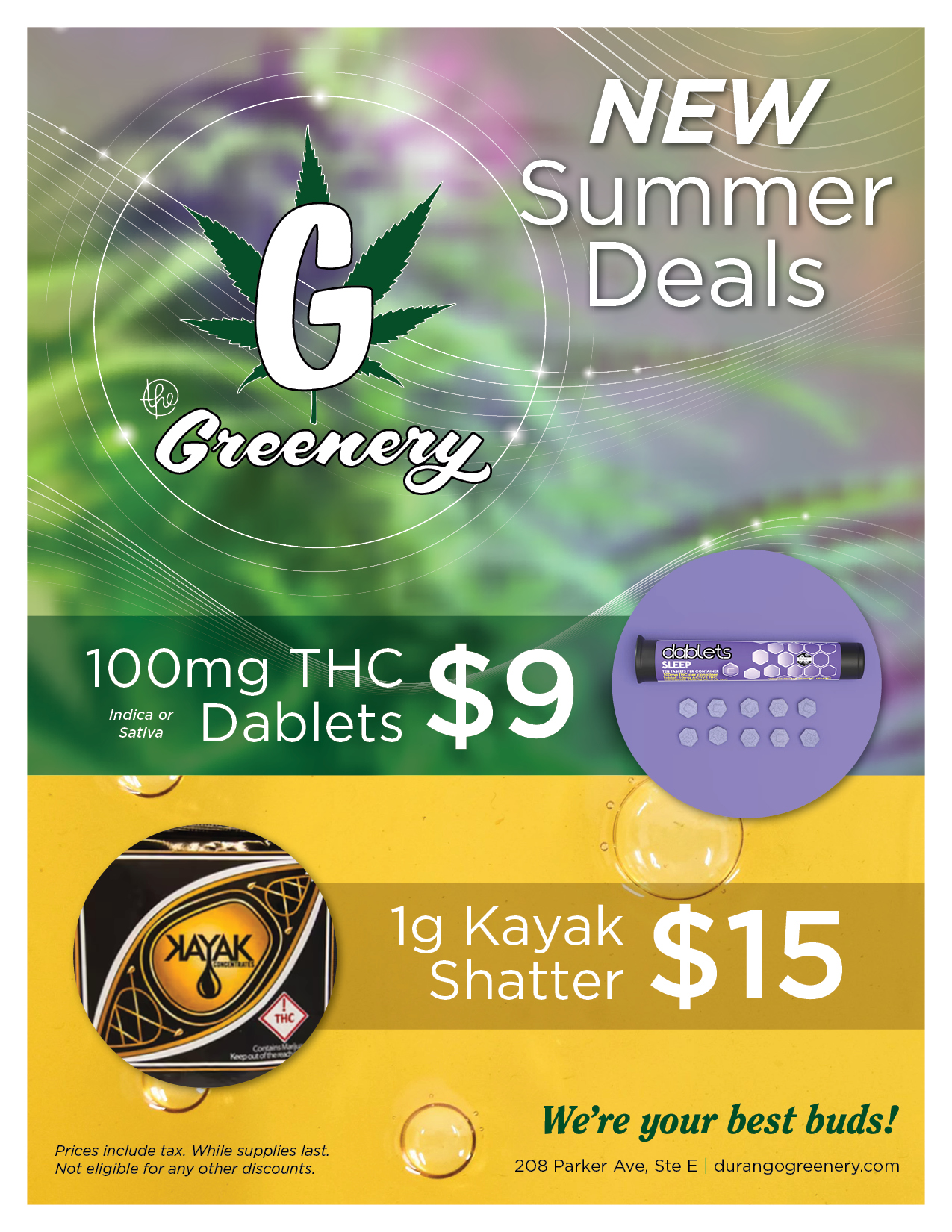 What’s new at The Greenery?

You already know that The Greenery has the cheapest weed in Durango. We’re selling full ounces of bud for $59, half-ounces for $39, and eighths for $8; all these prices are after tax. And for the record, the only thing “cheap” about this weed is the price—this is still high-quality flower, and we’ve discounted it simply because times are tough for everyone. You’re already dealing with inflation and ludicrous gas prices, so we figured cheap weed would help during these nutty times.

We’re excited to add Dablets to our shelves, and these 100mg THC edible packs are $9 after tax (but if you’re a regular, you know that all edibles are 15% off on Tuesday, which makes these bad boys $7.65 on Tuesdays). Isn’t that crazy? We’ve been around since day one of the legal cannabis movement here in Colorado, so it’s easy to remember when you couldn’t find a 100mg edible for less than $25 anywhere, so this is insane. This edible is available in Indica and Sativa.

And the reason this edible is so affordable has nothing to do with quality. Dablets are little pills that you swallow (10mg THC each), so there’s not much cost associated with the food portion of this edible, and since they’re so small (each pack is the size of a joint tube), the packaging costs were minimal as well. So, the good people over at Craft dropped the price of their Dablets considerably, and we’re passing along that savings.

We’re equally excited to introduce The Fifteen Dollar Dab, which today, is a full gram of shatter from Kayak. These grams won’t always be shatter because variety matters, so stay tuned for updates. And again, if you’re a regular, you know that all concentrates are 15% off on Wednesdays, which means you’ll be able to scoop a full-gram dab at The Greenery every Wednesday for $12.75 after tax, which is equally as insane as the edible deal. Seven years ago, when we first opened, we sold shatter for $65 per gram and it flew off the shelves. Now, seven years later, we’re proud to say that we’ve been able to drop that price by over 75%, which is awesome.

But hopefully, you also already know that The Greenery bests all the other shops in town on the other side of the spectrum as well. We have the best weed in Durango; we have the highest-quality edibles; we have true connoisseur dabs. And we’ve expanded these offerings as well for all you top-shelf shoppers, so here’s what’s new:

The superlative “best” is thrown around liberally in the cannabis industry, but these hand-rolls really are the best joints out there. Westword Magazine named these joints “Best in Denver” for 2022, and Westword knows what they’re talking about because they gave our Moroccan hash the same honor.

Each joint is filled with 1.75 of the best pot imaginable (it’s always ground bud and never shake/trim), and each one is literally rolled by hand, but don’t worry, they use a sponge to wet the glue, so there’s no stranger saliva on these things. And what’ve even cooler is that they use a spiral noodle (yes, and actual noodle) for the tip, and the noodle is gluten-free just in case. Crazy, right? Then they skewer each joint with a toothpick right down the center for better air flow, and they’re rolled with pink Blazy Susan papers, so there’s no such thing as a better joint. These hand-rolls are $18 after tax.

Simply put, these Alchemy Crystals represent the pinnacle of dabs. The team over at First Matter takes potent Live Resin and renders it down to purify it further, and then they allow it to recrystallize into the purest, most potent form of marijuana on the market. These full-gram dabs look like transparent quartz crystals, and they test close to 99% pure THCa, which takes a true scientist to achieve. These diamonds are $72 out-the-door, and they deliver a clean, bright, mind-altering high like no other.

Higgs didn’t used to be anything to write home about, but now, they’ve partnered with PMPCO, which is one of Colorado’s best cannabis cultivations. In fact, we sell eighths of loose flower from PMPCO for $49 after tax, but there’s an eighth worth of the same flower already rolled into joints in these packs that we sell for $43, so they’re a savvy choice.

There are six joints in each pack that are a little over a half-gram each, which makes for a 3.5g package total, and the pack itself looks a lot like a cigarette pack, so it fits perfectly in your pocket. That, and each pack comes with a branded book of matches, which is a nice touch.

Of course, we aren’t stopping there. Our purchasing team here at The Greenery scours the market on a weekly basis looking for the newest and greatest, so there’s plenty more coming down the pipe (pun intended). Here’s a little sneak peek as to what’s coming soon:

Sometime early in July, we’ll have the Honest Blunt Packs on our shelves, and this is huge. Each pack is nitrogen-flushed, so the weed stays harvest-fresh forever, and each pack contains 6 blunts that are 0.7g each for a 4.2g package total. These blunts are rolled with organic hemp as opposed to tobacco, so you get CBDa instead of nicotine, and they’re rolled with a 100-years-old cigar rolling machine from Cuba, which is just cool. The ridged case fits perfectly in your pocket and it protects the blunts, so all the boxes are checked with this coming-soon product.

And that’s that, my friends! Keep checking back in for awesome updates such as this one, and remember, We’re Your Best Buds!