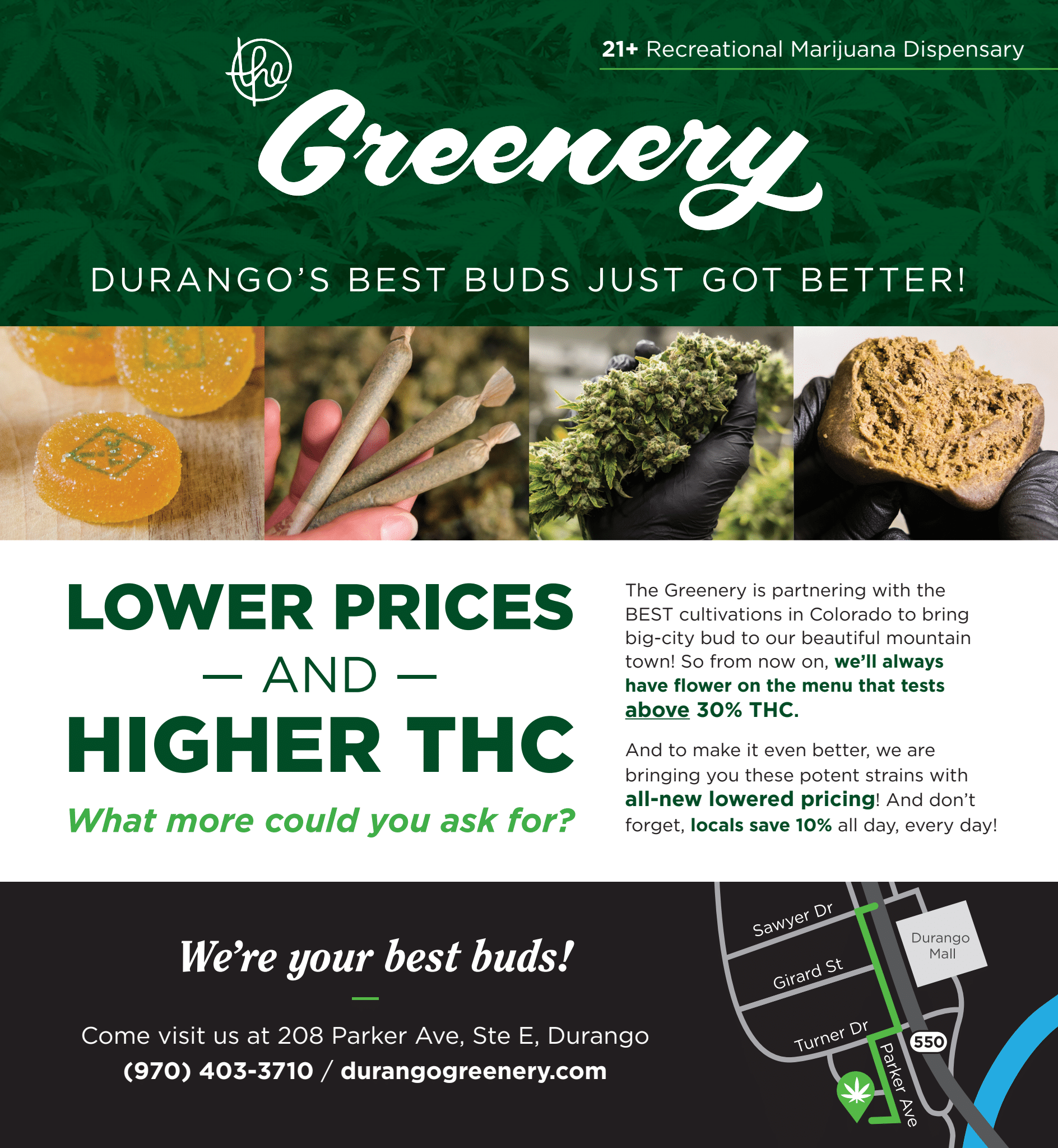 I know… that title was a mouth full. Sorry about that. But really, it sums up perfectly that which I’m trying to get across: The Greenery sells the best, most affordable, highest-testing flower in Durango. For real, starting right now, you can get an eighth of 30%+ THC cannabis for $34 after tax every Monday in our shop, which isn’t something I would’ve believed a year ago. Honestly, even the words “cheapest high testing marijuana” sound like they belong in an oxymoron as opposed to a blog, and yet if you look at our flower menu HERE, you’ll see that every word rings true.

Surprise! If you just clicked that link, you also figured out that we just lowered all our flower prices down to a place they’ve never been in the seven-year history of our company. But, why now? How is this even possible? No, it’s not because we’re getting high on our own supply, like Biggie always warned against, but rather, we’re all simply reaping the rewards gifted to us by supply and demand. I know this is a marijuana blog, so I’m not going to bore you with economics, but it’s important to know that Colorado is simply awash in low-priced, high-testing bud at the moment.

It’s an odd phenomenon, but for some reason, everyone who jumps into this industry of ours wants to be a grower. I guess the romanticized alure of growing weed is too much for most fledgling entrepreneurs to ignore, so cultivations keep popping up everywhere. Seriously, just to give you an idea, there are around 750 licensed cannabis cultivations in the state even though we have only 650 dispensaries or so, meaning that supply is outpacing demand. So, just like it is with every other commodity in the world, when there’s a glut, the competition cuts prices, and then you, my friend, get to bask in the savings. That’s why we just cut all our flower prices, some of which were reduced by nearly 20%.

What about the potency? Why does the Greenery now sell tons of flower that’s over 30% THC when most of it was 20%+ last week? Well, two reasons. One, we just had a bumper crop in The Greenery Grow thanks to some new nutrients, and our Super Lemon Haze in particular turned out splendidly. It’s testing over 30% THC and it smells like a bucket full of overripe lemons. Our Wedding Cake broke 28% even though it’s usually a low-testing indica, and our Super White came out much more “super” than usual. Good times all around. And the second reason our pot is more potent is that we made some new friends!

We’ve made a concerted effort lately to meet other cultivators around the state, especially those living and working in Boulder. Think about it this way: if you want to call yourself a real Country/Western singer, you absolutely must perform in Nashville—if you want to call yourself a real cannabis cultivator, you must grow in Boulder to see how you stack up against the best. So, that’s where we went. Just like the commercial says, we’re bringing big-city bud to this beautiful mountain town, and we’re going to keep it up. We’ve got some White Hot Guava on the way that’s pushing 34% THC, and it’ll be followed by nothing but fire, so if you’re a true cannabis connoisseur, you need to get in here ASAP.

Granted, the tetrahydrocannabinol percentage in pot doesn’t matter nearly as much as most people think (please excuse me while I climb up on my soapbox). Please remember that the higher the THC climbs, the further everything else falls, including terpenes and minor cannabinoids. Terpenes are what gives smoke flavor, and they determine the complexity of your high, so the potent stuff doesn’t always taste as delightful as the cannabis on our shelves with lower THC. A good way to think about it would be to compare grain alcohol (like Ever Clear) to whiskey: the grain alcohol is much more potent at around 80% alcohol, but there’s no complexity to the taste, as where whiskey is half as potent at 40% alcohol, and it can taste wonderful. So, they’ll both get you drunk, but you’ll enjoy the whiskey as where the grain alcohol is better suited for cleaning bongs.

That, and THC content has very little to do with quality. In fact, there will be plenty of times when you’ll notice that we’re charging less for strains that test higher than those on our top shelf. We do this because quality—determined by things like terpene content, bud structure, and grow ingredients—is more important than potency, and the two aren’t even remotely mutually exclusive. This is important stuff, but it’s time to climb down and stop preaching…

So, come see us ASAP! We have more affordable weed on our menu that tests higher than before, which means you can have your Ethos Wedding Cake and smoke it, too. All of us here at The Greenery will keep doing our best to bring you new, potent strains with Boulder quality and more affordability, because after all, We’re Your Best Buds!