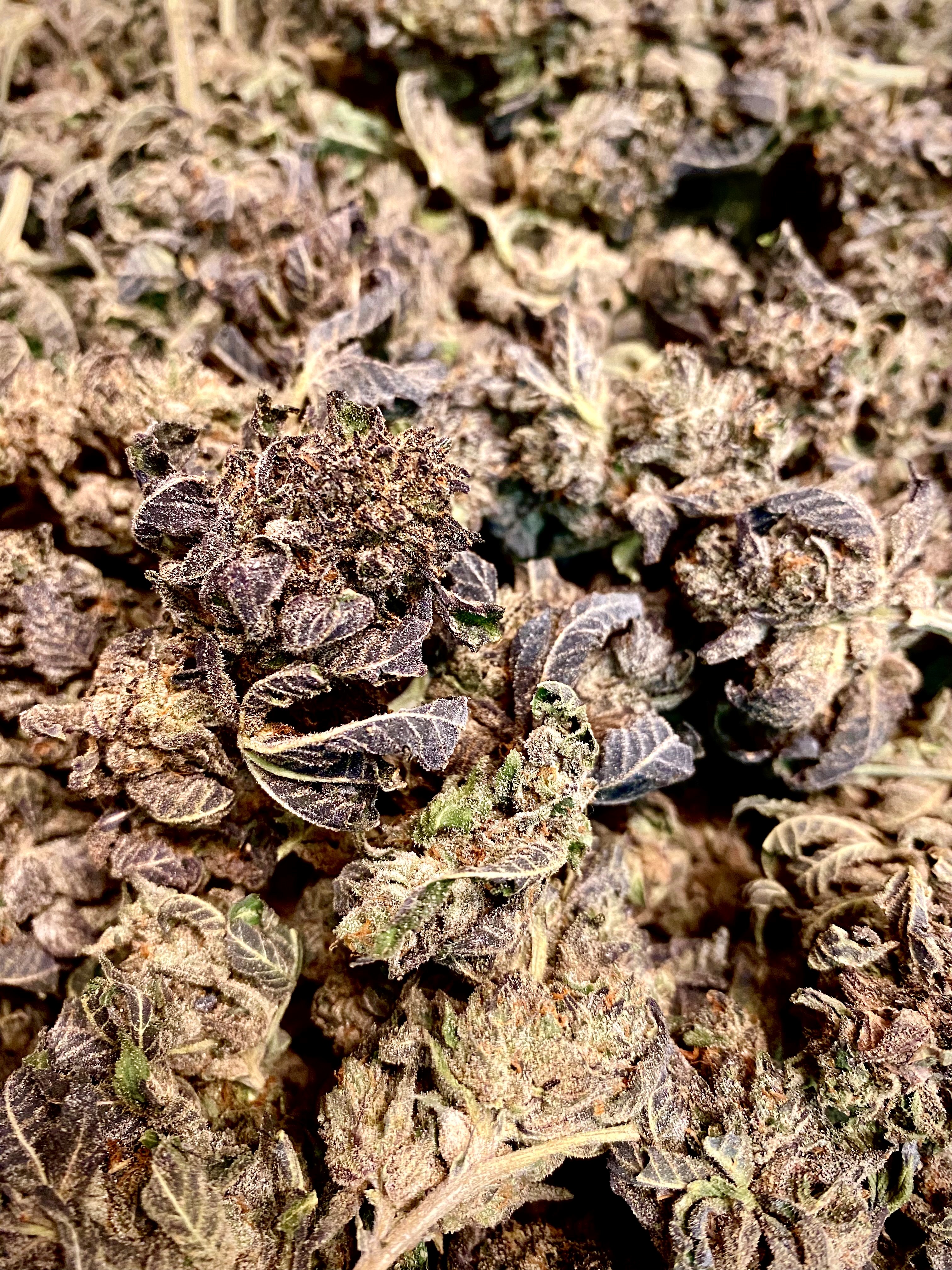 Anthocyanins are what make purple pot purple. I wanted to answer that right off the bat without a rambling preamble just in case you googled something about purple weed and came here for a quick answer. But the real reason I’m writing this blog is twofold: one, The Greenery Grow is famous for purple weed and we have eight new and exotic strains in this category that I’d like to tell you about, and two, there’s a glut of misinformation out there about purple pot, so I wanted to set the record straight. We’ll start with the latter first…

Per the most common and completely inaccurate rumors surrounding purple pot, the three I hear most often are, “purple weed doesn’t get you as high,” or, “purple marijuana is always an indica,” or, “any strain of marijuana can turn purple if you grow it in cold conditions.” All three are false. Anthocyanins are nothing more than water-soluble vacuolar pigments that show up in nearly all flowering plants. They’re what make roses red and violets violet, and since they’re water-soluble, they’ve been used as dies forever—in fact, when colonial Americans used blueberries for purple dyes, they did so thanks to blueberry anthocyanins.

In the realm of cannabis, anthocyanins are categorized alongside flavonoids, which are polyphenolic metabolites that exist in a variety of fruits, vegetables, and weeds such as marijuana. Flavonoids are not psychoactive, and they don’t influence your high in the slightest when you smoke them, so per the first myth I mentioned, it’s completely impossible for the purple anthocyanins that exist in purple pot to stop you from getting high. Purple pot still contains THC, the psychoactive compound in cannabis, and the anthocyanins don’t diminish THC percentages in lab tests, so if you think purple pot doesn’t get you as high as the green stuff, it’s all in your head.

Secondly, per purple pot always being an indica varietal, this is another big fat “nope.” After all, Sativa and Indica cultivars are in fact members of the exact same species, so they can both contain anthocyanins. Fuel Biscuits and Bazookies #10 are both sativa-dominant hybrids that we grow and sell right here in Durango, and sometimes, they both turn out just as purple as a grape, which shoots a gaping hole in that indica-only claim. But I know how this rumor started, so we should get into that, too.

Chlorophyll is the most dominant pigment in cannabis, just as it is with other leafy plants, and it’s green. If you’ll remember your lessons from high school biology, chlorophyll lives in the chloroplasts of plant cells, and it’s the compound most critical to photosynthesis, wherein plants transform light into energy. When it comes to deciduous trees (the ones that lose all their leaves in the fall), the chloroplasts lose their integrity right before the leaves fall, which allows the green chlorophyll to escape, thereby turning the leaf a different color, such as red or yellow. This is what draws hordes of tourists to Durango so they can drive slowly and see all the pretty colors. And with marijuana, the exact same thing happens as the plant starts to mature: less chlorophyll is produced, and some is lost, so the anthocyanins become the dominant pigment, thereby coloring the pot purple. This happens more quickly in cold temperatures, much like those seen naturally outdoors in autumn.

Per the last myth, that “any strain of marijuana can be purple if you grow it in cold conditions,” guess what? Not all anthocyanins are purple. Some of them are orange or red or yellow, or even dark or bright green. And it’s the innate genetics of a plant that decides which anthocyanins are present in the flowers, not the growing environment nor the sativa/indica designation. So yes, it’s true that if you grow any strain of marijuana in cold conditions, the anthocyanins will become more apparent given the reduction in chlorophyll production, but sometimes, the plant will turn red or yellow, not purple, because it doesn’t contain the purple anthocyanins thanks to genetics. So, no, it’s not possible to turn all strains of pot purple with differing growing temperatures because the plant needs to be born with purple anthocyanins to turn purple, and not all of them are.

Alright… now that we’ve set the record straight per three common purple-pot myths, it’s time to get into the nine purps varietals that we grow and sell here in Durango (“purps” is the slag term for purple cannabis cultivars, but you already knew that if you’re a fan of rap music). Here they are:

1.) Truth Serum was bred in the Midwest via a three-way cross between G13, Trinity, and Pineapple. The resulting cultivar has very dense buds and the classic green-with-orange-hairs look you’d expect, albeit with a touch of purple, and the tropical nose is dank and classic. Truth Serum is packed with terpenes such as Limonene and Pinene for an uplifting high that’s balanced on the other side of the spectrum with ß-Caryophyllene, ß -Myrcene, and Linalool. Expect a thoroughly relaxing smoke that’s perfect for evenings or weekend mornings from this Indica-leaning hybrid.

2.) Bazookies #10 is a strain made famous by the Front Range right here in Colorado, which is something we helped accomplish given that we’ve started growing this wonderful cultivar. It’s a cross between Bubblegum and Girl Scout Cookies, but the nose you’d expect is replaced by hops and grass, and the plant itself is a lovely dark green/purple covered with so many crystals it looks like a saltshaker was used. Rich in the terpenes ß-Caryophyllene,  ß -Myrcene, Humulene, and Limonene, we’ve designated this strain as a Sativa, but don’t let that fool you because the goldilocks high is perfect for any time of day.

3.) Violet Vixen = Purple Punch X Jet Fuel Gelato. This strain produces smaller, dense buds that are perfect for pipes. The flower itself is highlighted with purple hues (ergo the “violet”), and the nose is dominated by hints of sour grape, sweet berries, and a touch of herbal bliss. This sativa-dominant hybrid is perfect for daytime smoking, or for those nights when you want to stay up giggling.

4.) Gelato. Sometimes called “Larry Bird” or “Gelato 33,” this indica-leaning hybrid was bred via a cross between Thin Mint GSC and Sunset Sherbet. This fruity, deep-purple bud has a creamy taste and high that transcends normal pot.

5.) Purple Sunset #4 is a specific phenotype Purple Sunset first bred and grown by Ethos Genetics. This strain is a breeder’s mashup of Mandarin Sunset, Mandarin Cookies, and Purple Punch, and the nose on this one is just as complex as you’d imagine with spicy notes of fuel mingling with floral citrus. Expect a nice, laidback high from this strain with a touch of berries on the palette. Oh, yeah… and it’s purple.

6.) Tropicana Cookies was first created by Harry Palms (from Bloom Seed Co.) by crossing Tangie and Girl Scout Cookies. The Cookies flavor comes through dominantly with this varietal, but there are plenty of citrus notes and sweetness on the backend, almost like sugar on your lips. Expect slightly purple buds covered with red hairs, as well as an awesome smoke from Tropicana Cookies.

7.) Garlicane is a rare indica-dominant cultivar created by crossing Slurricane and GMO. GMO stands for “Garlic, Mushrooms, Onion,” and the garlic terpene came through strongly in Garlicane, thus the name. Expect a deep and down high from this varietal with plenty of funk on the pallet. These purple buds are beautiful, so if you’re an Indica lover, you’re missing out by not giving Garlicane a try.

8.) Borealis is a deeply purple strain that was created via a cross of two deep indica varietals, Northern Lights and Skunk #1. This strain will be fruity and sweet on the pallet, but there’s a heavy serving of hash on the exhale with a touch of skunk. Borealis brings with it a dreamy, sedative high, but it’s subtle enough to avoid couchlock. If you’re a fan of Indica strains, you need to get in here and see this stuff immediately. Borealis is extremely terpene rich with  Limonene, ß-Caryophyllene, Pinene, Linalool, and Ocimene.

And that’s that! Chances are that no matter when you shop, we’ll have one of these eight purple pot strains available for sale, but just in case, you should always check our online flower menu HERE before showing up if you’d like to try putting purple pot in your pipe. But please, even if you simply want to see or smell the best purple pot in Durango, feel free to swing by for a free peek and sniff, because when it comes to purple cannabis, We’re Your Best Buds!