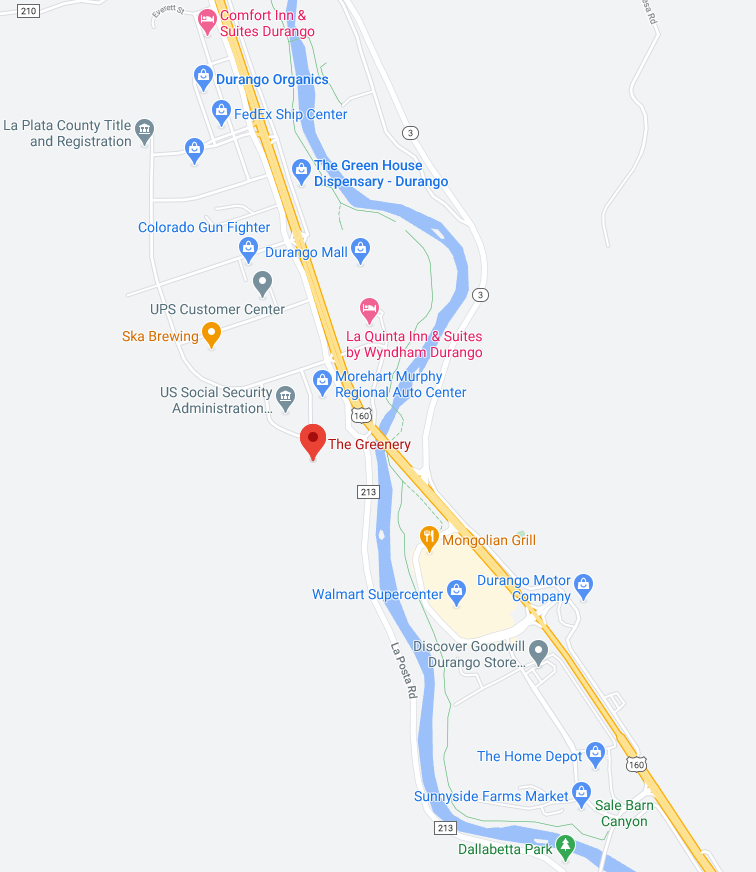 It’s right here at 208 Parker Avenue in Durango, Colorado! I mean honestly, why would location matter when we have the best pot on earth? But still, I’m sure plenty of people out there pull out their phones, Google “marijuana near me” not knowing what’s up, and then get led astray to the pot that’s closest to them geographically as opposed to finding the best pot in town, so I’m setting things straight this week. After all, it’s better to go farther to find good pot than it is to swing by the closest place with schwag weed.

But let’s back up. The Greenery is the best recreational marijuana dispensary in Durango, hands down, and I should probably tell you why we’re the best before we get to why our pot is the best. So, for one, we were the first recreational-only dispensary in Durango (our 6th Anniversary is coming up on 4/10, and we’ll have all sorts of deals that day), so we’ve had plenty of time to get things perfected. Secondly, we’ve used all that time to dial our customer service, and I promise you it’s the best in town: we just broke 1,000 reviews on Google, and we have a 4.9-star rating, which isn’t something any of the other Durango dispensaries can say. And thirdly, we’re 100% locally owned and operated, so we’re not part of a soulless corporate chain, and this sets us apart from most of the other shops selling recreational marijuana in Durango. Now, let’s get into why our marijuana products are the best…

We grow all our top shelf marijuana inhouse, and we don’t wholesale or mass-produce it (unlike many of the other places), so all the plants in our boutique grow facility are given individual love and care. We talk to them and prune them and water them by hand while they’re babies, and we use natural pesticides only, because besides selling it, we also smoke it (and only it). We’d never try to sell you something that we wouldn’t consume ourselves, so you can trust the flower that comes out of our grow. In fact, we even have a live feed of our cultivation playing on a TV in our dispensary just so you can see the magic for yourself.

And thanks to all the love and attention our small, craft cultivation gets, the flower that comes out of it really is the best in southwest Colorado, and I’m not just saying that because of my bias. Our buds are big and beautiful, their structure is dense, they’re covered with sparkling crystals, and the smell is simply euphoric given the insane amounts of terpenes well-grown flower can contain. All you’d have to do is set a gram of our flower next to a gram of someone else’s, and then you’d understand what I mean. And if you ever want to know exactly which strains we have available on any given day, just click HERE to see our flower menu.

When was the last time you perused our marijuana edibles lineup? If it’s been a while, please click HERE to see our new marijuana edibles menu, because it’s way too long to list in a blog. We have fast-acting water-soluble edibles; we have long-lasting lipid-soluble edibles; we have infused baked goods and gummies and lozenges and mints; we have infused drinks and THC powder you can use to infuse your own drinks; we have distillate infused edibles and we have solventless edibles; we have everything. Honestly, our edible offerings are curated with you—the mature consumer type, with a refined taste—in mind, so I promise we have in stock the type of edibles you love (as a pro tip, all our edibles are 15% off on Tuesdays).

Seriously, we have them all, and we’re the only dispensary in Durango that can make this claim. The reason for this is that we have our very own Hash Factory, and it’s the only company in Colorado making traditional, kief-based concentrates such as Moroccan and Lebanese Hash, and our dispensary is the only one in town that sells them (but they’re also available at over 200 dispensaries in other cities all across Colorado, and for a list, click HERE).

But if you’re not a fan of old-school hashish, we also have all the new stuff, too. You can click HERE to see our concentrate lineup, or you can click HERE to see our cartridge offerings, but I wasn’t exaggerating when I said we had “all” the concentrates. We have THCa Diamonds, two different tiers of Live Resin, the best Live Rosin available, CRC BHO, three different kinds of wax, and four different kinds of shatter. For carts, we have half-gram, and full-gram, we have CO2, BHO, PHO, Live Resin, Live Rosin, and even ethanol-distilled oil carts. We have Pax Pods and Airo Pro Pods and standard 510-thread carts. For real, if you can’t find a dab or a cart here that you like, it probably doesn’t exist.

So, instead of googling “marijuana near me” and ending up somewhere you shouldn’t go, simply put 208 Parker Avenue, Durango, Colorado into google maps, and come to The Greenery where the service and products are unbeatable, because We’re Your Best Buds!