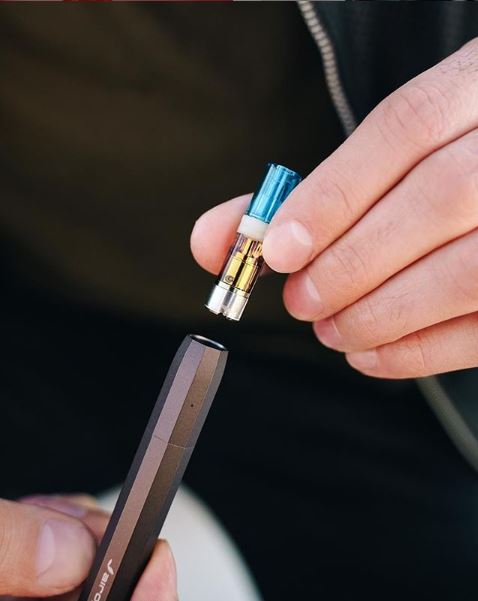 There’s a universal sign language gesture for “marijuana vape cartridge,” and I bet you already know it, because every tourist who walks though our door uses it without knowing. They’ll come in and hold up their hand and then hold their thumb and forefinger apart by an inch or so, and say something like, “do you have those vape thingies?” Lately, just to have a little bit of fun behind the counter, as soon as someone holds up their hand in the universal “vape thingy” symbol, I say “you’re looking for a vape cartridge” before they can ask for one, and they give me a weird look, as if they just met a psychic.

But there’s another gesture people use as well that I’ve learned is universal: sometimes, when a customer who’s looking for a cartridge comes in, they’ll pinch their fingers together and move their hand up and down like they’re plugging something in, and they’ll ask, “do you have those magnetic vape things?” Well, I used to say “no” because we didn’t carry them, but so many people asked that we decided to add them to our shelves. Oh… and by the way, instead of asking for the “magnetic vape things,” all you need to do is ask for an AiroPro Vape Cartridge, and we’ll say yes, because now we have tons of them in our Durango dispensary.

Yes, it took us a while to bring this product on given that it came out a few years ago, but there’s a reason for that. In the beginning, only one company filled the cartridges for this vape system, and the oil itself wasn’t that good. But now, a company called EvoLab took over, and they’re filling the AiroPro carts with some of the best oil and Live Resin in the state. Frankly, we couldn’t be more excited to have AiroPro products on our shelves, but that doesn’t do you any good if you don’t know the details, so here they are:

There are two different types of vape batteries on the market: 510-threaded batteries, and pod-system batteries. The first type is pretty universal, and with it, you screw the cart onto the battery (“510” is the thread size). The second type is becoming increasingly popular—with pod-systems, you simply plug the pod into the battery, which is quicker and easier, and then start smoking. However, the reason the AiroPro system is so awesome is that it’s a hybrid that lives right in the middle. There’s a magnet inside the AiroPro battery, and all you do is drop in a cartridge (which sticks to the magnet) and then inhale. It’s super easy. But you can also buy a little adaptor online that screws onto 510-threaded cartridges to make them compatible with the AiroPro battery, so you get the best of both worlds, which is game changing.

As to the battery itself, it’s pretty slick. It’s a 320mAh battery, so its power level is right in that middle Goldilocks zone, but the cartridges themselves were designed to give off three times the vapor as a regular 510-threaded carts, so if you pull hard when you inhale, the vapor cloud is much larger than you’d expect from a 320mAh battery.

But the most interesting thing about the AiroPro battery is the haptic feedback; it vibrates while you’re inhaling to let you know it’s working. That way, there aren’t any flashing lights when you get high, making this one of the more discrete vaporizers out there. And remember that magnet inside I was telling you about? Well, it’s strong enough to turn the entire battery into a magnet, which means you can stick your vape pen on your refrigerator, if you’re into that sort of thing. Why knows? Maybe you’re the type who likes to take a hit every time you open your fridge; we don’t judge.

This is the exciting part, because like I said, now that EvoLab is filling the AiroPro cartridges, you can get awesome oil for an awesome vape system, and in the cannabis industry, that’s like having your cake and eating it, too. So, we’ve brought on a Sativa, Hybrid, and Indica version of the 500mg Alchemy oil from EvoLab. If you haven’t tried this stuff, you should probably stop reading now and come get one.

The best thing about batteries like the AiroPro system is that cartridges just pop in and pop out, so it’s easy to switch back and forth in the middle of your smoke session. And trust me, you need a Live Resin cartridge in your line up, because this is the stuff made with fresh-frozen flower, not dried and cured flower like everything else. The LR carts we brought in for the AiroPro come from Fuego, and they’re even a bit better than the Alchemy, if such a thing were possible.

And that’s that! So, if you’re looking for a new high-tech vape system, or if you’re one of the many people who’ve come in asking for “one of those magnetic vape thingies” along with the universal hand gesture, come see us! Our hours are awesome, and we’re open seven days a week, so when it comes to AiroPro batteries and cartridges in Durango, We’re Your Best Buds!