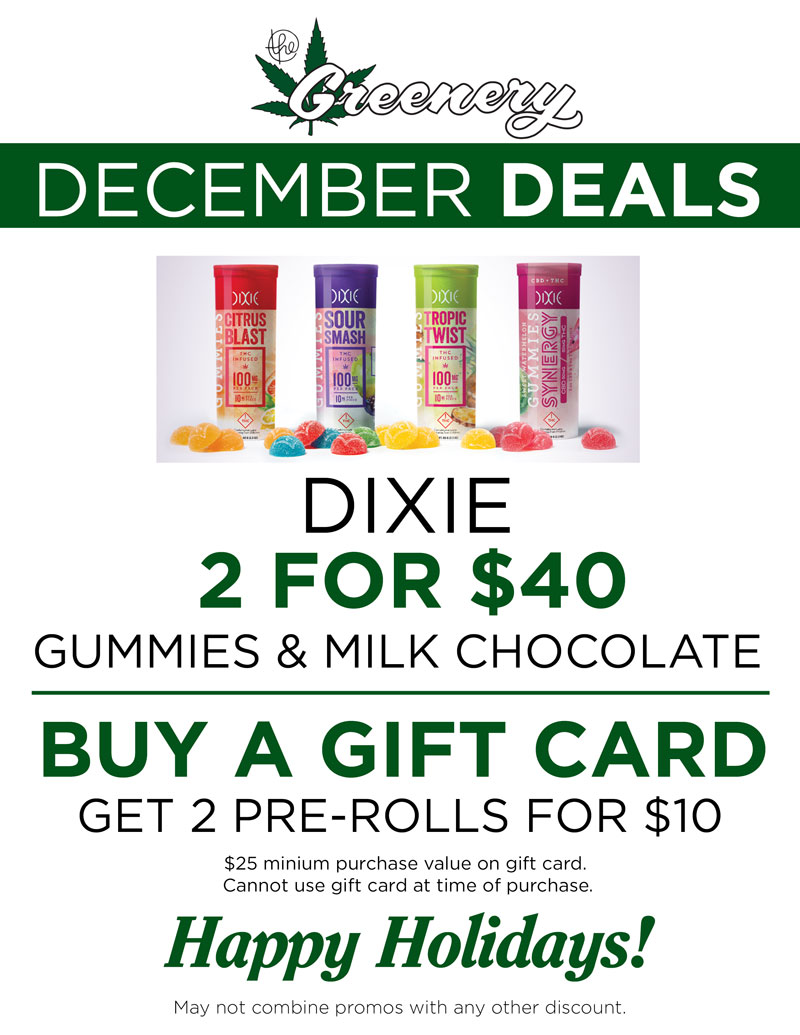 If you’re a regular reader, I hope you’re not getting tired of these promotional pieces because I know I’ve been throwing quite a few at you. We’ve had November Deals and Black Friday Deals and a couple random deals thrown in for good measure, and I know it’s a lot. But then again, every single one of these blogs is designed to save you money, so I don’t feel that bad. And frankly, these things are fun to write. I’m 40, so I come from the days when there was no such thing as a “special” on marijuana, let alone holiday discounts, so every time I write one of these, it feels like I’m normalizing legal marijuana, and that’s a good thing. So, without further ado, here’s a list of all the deals you’ll find in our Durango dispensary this December:

1.) We started this first deal on Black Friday, but since it went so well, we’re going to keep it going until we sell out of supplies. So, if you come in and buy any two Stillwater products, you can snag a Ripple Relief or a box of Honey Lavender gummies for $1.

2.) We’re offering a “2 for $40” deal on all our Dixie gummy packs and milk chocolate bars, and if you buy these products normally, you know that’s a spectacular deal. Usually, it’d cost you $48 for two of these products, so you’ll be able to save more than 16% throughout December if you buy in bulk.

3.) From 12/15 through 12/21, we’re running a BOGO 50% off deal on all locally produced Sweet Cartridges. Last month, we ran this special for just one day, and it was insane, so we decided to see what would happen if we did it for a whole week (it’ll probably be more insanity).

5.) This one is my favorite because it still blows my mind that you can walk into a dispensary and buy a gift card for someone who can then come in later to use it on marijuana. For real, isn’t that crazy? These things are bona fide gift cards with magnetic strips and everything, just like the ones sold at restaurants, and I love that we have a cannabis version. Anyway, if you come in and buy a $25 gift card for someone, we’ll sell you two, full-gram joints for $10, which comes out to 50% off. See what I mean? That guy I used to meet in parking lots never did anything like that for me!

There; that covers it. But I also want you to know that even though we’re packing December full of savings, we’re still going to honor all of our daily deals that you can read about HERE. We’re still offering a 20% discount on everything in the store to veterans, all day every day, and the same goes for those of you who have valid Colorado Medical Marijuana cards. And yes, I’d imagine that another deal of some sort pops up sometime during the month, because when it comes to saving you money on marijuana this December, We’re Your Best Buds!