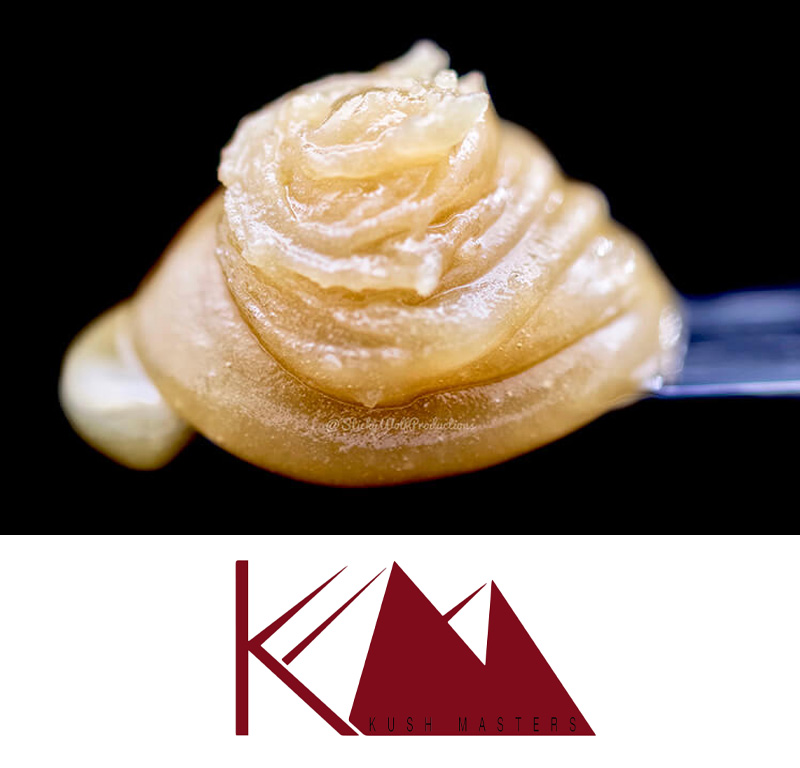 My inner pot nerd is so, so excited right now, because the two products I’m writing about this week are both next-level dabs designed for the hashish connoisseur, and we’re the only Durango dispensary selling them. For real, I usually start these posts with a story or anecdote just to keep things fun, but I’m going to skip all that nonsense this time and simply jump right into it because I can’t wait. Let’s go…

Live Rosin is as good as a dab gets, and it takes a true extraction company to make this stuff properly—that’s exactly how I’d describe Kush Masters, who is our Live Rosin supplier. And the reason it takes a master to make this stuff is because Live Rosin is hash made from hash; let me explain. The first step is to make Bubble Hash, which is a touchy process. First, flower is put into an agitator with an ice-water bath. The ice water makes the trichome heads brittle, which are the THC-packed crystals on the bud’s surface, and then the agitation breaks them off. This creates a hash-filled slurry which is filtered through a series of micron screens, and then the resulting hash is put into a freeze dryer to remove the moisture, but all of that is just the first step.

Next, fresh-frozen flower is brought into the picture (this is when growers take their flower and freeze it immediately after harvest instead of drying and curing their crop). In fresh-frozen flower, all the terpenes are preserved via the freezing process, and the plant cells burst, which makes the extraction process much easier. Then comes the fun part: the fresh-frozen flower is covered in bubble hash, wrapped in steel mesh, and then put into a heated press. The combination of heat and pressure presses all the cannabinoids out of the mixture in the steel mesh, thereby leaving behind all the plant matter, and then boom, Live Rosin is born. In my opinion, Live Rosin is the pinnacle of dabs because it’s completely solventless, yet it has the potency of a hydrocarbon extract, which is rare indeed. Fun fact: rosin is called “rosin” because it looks like the rosin fiddlers use on their bows. Anyway, moving on…

THCa Crystals, or Crystalline, however, is the most potent concentrate on the market—this hash can come in at 99% THCa—and it takes a straight-up scientist to make this stuff. Once again, I’ll explain. First, more of that fresh-frozen flower is stuffed into an extraction tube through which supercritical butane is pumped. Butane is a hydrocarbon, so it strips from the plant matter all the cannabinoids to make an oil, which is poured out of the tube. Next, the oil (which is called “live resin” at this point) is put into a purge oven which removes the residual butane with heat and a vacuum pump. And then the live resin is put into a bath of acetic acid (the same stuff you’d find in vinegar) and hexane, which removes even more of the plant matter and impurities. The resulting solution is then put through a filtration system, and then into a roto-evaporator (which is a ridiculous machine that looks like R2-D2). The roto-evaporator uses heat and motion to separate out the THCa from the solution.

At this point, many crystalline makers take things a step further with a second bath of chloroform and methanol, which strips out all the terpenes to make a pure-white hash that’s 99% THCa, but that’s gross because terpenes give hash its wonderful taste. That’s why we chose Viola Extracts as our Crystalline supplier. They use only the first bath to make their crystals, which are referred to as “unwashed,” because skipping the second bath preserves all the flavor, which is a good thing. Their crystalline is in the 96% THCa range, and it still contains enough terpenes to give it a spectacular cannabis flavor as well as a nuanced high. Honestly, this stuff is simply insane.

Can you see why any pot nerd would blow a gasket over these dabs? Concentrates such as these simply didn’t exist before legalization because you need labs and chemists to make them, and even now that they exist, they’re exceedingly difficult to find in mountain towns like Durango because all the demand for crazy dabs lives in the big cities. And yet here they both are, sitting on the shelves at our Durango dispensary, because that’s how we roll. And please, don’t be put off by how complicated these two concentrates sound because they’re both easy to smoke—to learn two new ways of doing so, click HERE. Either way, please know that at The Greenery, we’ve always striven to bring the newest and best cannabis innovations to Durango, exactly like we’ve done with Live Rosin and Crystalline, because We’re Your Best Buds!