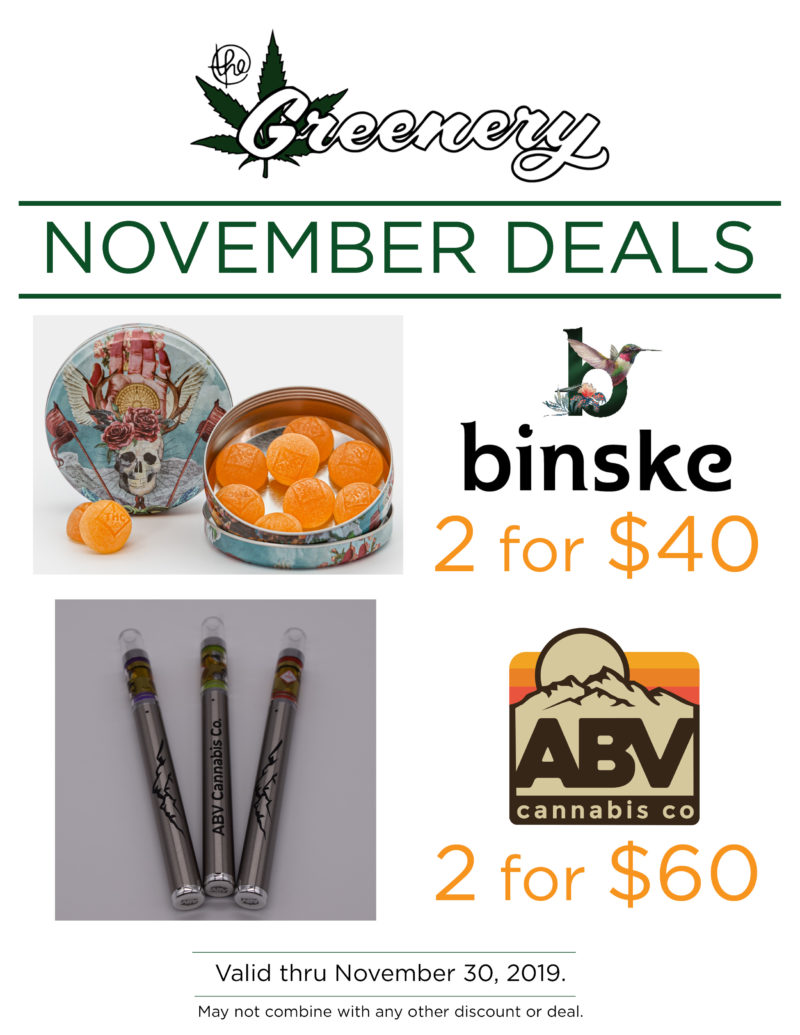 Retail establishments always seem to rush the holidays, and it seems to get worse year after year. Know what I mean? Pumpkins and Halloween decorations appeared at the grocery stores this year in early August, and even though the holiday hasn’t yet arrived, I saw the same decorations on clearance yesterday to make room for the Christmas stuff. The stores keep jumping ahead to push products associated with what’s on the horizon instead of what’s happening now, and the consumerism behind it all makes the holidays fly by when we should be taking our time with the season to savor each individual holiday. That’s what it’s all about.

In that vein, I feel a bit guilty about this post because cobwebs still adorn our Durango dispensary, yet here I sit, writing about the deals that are coming next month. Granted, that’s only one week away so it’s not like I’m jumping the gun like the stores already selling fake Christmas trees (yes, they’re already here), but I’m still going to keep December’s deals to myself to slow things down a bit (that, and I’m not sure what we’re doing in December, so it’s not like I could tell you anyway). So, here’s most of what’s happening this November at The Greenery (I say most because the holidays wouldn’t be holidays without surprises):

1.) We’re running a “2 for $40” special on Binske gummies (which would usually cost you $48, so this deal is awesome). Just so you know, when it comes to edible companies, Binske is as good as they get. In fact, Leafly named Binske their “edible brand of the year,” Binske is now the largest marijuana brand in the world (ranked by territory served), and the company has even been featured in Forbes magazine. Binske takes quality to a higher echelon with their craft edibles, and the artwork on their packaging is next level. Their gummies are vegan and delicious, so they fit everyone’s needs, and frankly, we couldn’t be happier about the deals this November because these gummies are newer than most, and plenty of people are about to discover something awesome when they take advantage of this sale.

2.) We’re also running a “2 for $60” deal on the ABV disposable vape pens (for which you’d usually pay $70). Now, before I get into this one, I want you to know that we’re aware of all the bad news that’s out there regarding vape pens, but ABV went so far as to send us a letter detailing the additive-free formula of their ethanol-extracted oil, and if you’re worried, please come in and ask to read it. Anyway, each of these disposable pens contains 300mg of terpene-enriched oil that’s potent and wonderful. If you’re traveling and you don’t want to invest in a complete vape set up with a battery and cartridge, a disposable is the way to go. That, and the only thing better than one disposable is two of them, which is why this deal is so awesome.

And that’s that. We’ll get extra-festive and run a Black Friday special, so make sure you’re enrolled in our Loyalty program for the exclusive details. Also, we will indeed do something special for December because the entire month is the cornerstone of the holiday season, but you’ll need to wait to see what it is (because I have to wait, too). Either way, please come see our dispensary this holiday season because the munchies make any Thanksgiving feast better, I promise that gifts bought here will please anyone on your list (so long as they’re 21+), and because We’re Your Best Buds!