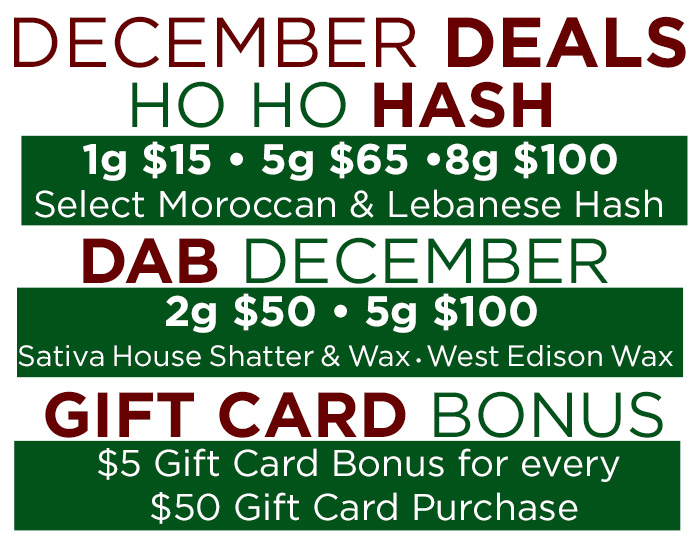 Quite a few customers who came in on Black Friday were surprised to find that we were offering sales—it’s an odd phenomenon, but for some reason, people think that since we sell marijuana here, we’re different than all the other retail stores in Durango, but we’re not. We accept debit cards, we offer coupons, we offer discounts to veterans: we do all the regular things that regular stores do, even though the product we sell isn’t yet considered “regular.” But I get it: buying legal weed is weird enough as it is, and coupons or discounts make it seem even more surreal.

So, this week, I’ve decided to write a blog centered on all the December discounts you can find in our Durango dispensary. And frankly, it’s something I need to do for myself because we have so many specials this month that it’s difficult to keep track of them all. Seriously. Let’s get started…

For one, all our daily deals are good throughout the month: on Monday, if you buy a gram of flower, your next gram is half-off, and this special can be applied to 28g purchases, which saves you a ton on the best flower in Durango. On Tuesdays, all edibles are 15% off. On Wednesdays, all concentrates are 15% off. On Thursdays, you can take 15% off one item of your choice, including up to an ounce of a single strain of flower. On Fridays, you can pick up a one-gram pre-roll for a buck after spending $50 before tax, and on Saturdays, all our solventless concentrates are 15% off. See what I mean? I haven’t even talked about any December deals, and it still took me a paragraph just to tell you about our daily dispensary deals.

Alright… as to December, we have all sorts of things popping off (the holidays matter to dispensaries just as much as to all the “regular” stores out there). For one, while supplies last, we’re offering a 25% discount on packs of sativa chocolate chip cookies and rosemary cheddar crackers from Love’s Oven, so if edibles are your thing, you should hurry in. We also have a few bottles of CBN capsules from Mary’s Medicinals that are 25% off, so if you’re looking for something that might act as a sleep aid, you should get here quickly as well. And if you’re into vaping, we’re offering a 20% discount on all our 200mg disposable vape pens from Sweet while supplies last.

But here come the big ones: Dab December and Ho Ho Hash!

Dab December: all month long (while supplies last), you can pick up two grams of Sativa House Wax or Shatter or two grams of Wax from West Edison for $50, or five grams of the same concentrates for $100. Those prices are after tax, and if you’re someone who buys dabs, I don’t have to tell you that our Dab December deal is ridiculously awesome.

Ho Ho Hash: throughout December, we’re running a special on select strains of our solventless Moroccan and Lebanese Hash. While supplies last, you can pick up one gram for $15, or five grams for $65, or eight grams (which is your daily limit) for $100. All those prices are after tax, and they’ll save you a ton—any other month, eight grams of Moroccan or Lebanese Hash would cost you $336; you don’t need to be a mathematician to figure out that a $226 discount is a big deal.

There. See why I needed to write it all out? Even now, when people come in and ask, “do you have any deals going on?” I have to stop and think after saying “yes.” If I listed them all out loud, it’d take a while and I’d probably forget a few, so now, you and I both have a blog we can read for a reminder.

That being said, the real reason I wanted to write this was to wish you and yours a happy holiday season. This time of year is always magical, and we need all the well-wishes that can be mustered given all the craziness that’s out there in the world. So, if you need a little something to brighten your days or a gift for the cannabis lover in your life (yes, we sell gift cards, and we’re even offering a $5 bonus on each $50 gift card), come see us and our December deals at 208 Parker Avenue, but make sure to bring your valid I.D. that proves you’re twenty-one or older. We’ve packed December full of all sorts of savings, because We’re Your Best Buds!