April’s Best Bud of the Month

Chris Romero is a family man. His thoughts and conversations are always about his eighteen-months-old son, Julian, and his wife, Stephanie. And they’re both delightful—Stephanie and Julian came to our last company function and did their best to smile while everyone else took tequila shots, and they became part of our Greenery family as if it were meant to be. And frankly, we love that; it’s wonderful to see young professionals like Chris jump into this industry to support a family life.

But you might not know Chris because he’s one of the newer people tending bud behind our counter (he’s the tall guy with a quick laugh and an easy smile), so this week, we thought you should meet him:

Q. When did you start working for The Greenery?
Chris. “December thirteenth of last year.”

Q. What’s your favorite way to enjoy marijuana?
Chris. “I like dabs because nothing else compares, and Live Resin is the best. It gives you a clean high with a wonderful flavor.”

Q. Tell us about your pet.
Chris. “I have five dogs, two cats, and a kid… we decided to be those type of people.”

Q. Which station do you stream while you’re working at The Greenery?
Chris. “Typically, it’s Gorillaz, but sometimes, I go for the harder stuff.”

Q. What do you like most about working at The Greenery?
Chris. “I love everything about working here. I love the weed, I love the people, and actually, I shopped here for three years before hiring on.”

See? If the Greenery has always been Chris’s choice for marijuana in Durango, he understands quality, so it was an obvious choice for him to apply, and an obvious choice for us to hire him. But just because he’s new to The Greenery doesn’t mean he’s new to this town—Chris owns the house he grew up in, and his native-born Durangoan status makes a lot of us look like newcomers, much like he might look to you if you’ve been in recently and met the “new guy.”

Either way, we’re lucky to have him. He stands behind the counter with the confidence of someone who understands cannabis, and with the purpose of someone who’s doing this all for a reason, and because of that, Chris Romero is your Best Bud of the Month for April; thank you Chris! 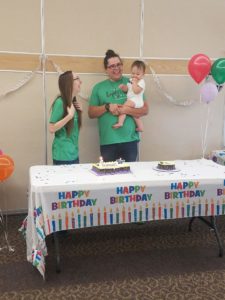