I have the same first name as my brother-in-law. I’ve known him for most of my life—we grew up together in a rather remote part of Alaska, friends long before we became family—and we’ve always shared that strange rivalry that lives between two people with the same first name. He calls me “#2,” in a spot-on Dr. Evil voice, and I call him a whole litany of things that’re much worse. And in another odd little twist of coincidence, we’re both in the marijuana industry: my brother-in-law is a hipster who grows medical marijuana legally in the forests of California (wrongly thinking that his pot is the best), and I sell the stuff just as legally here in Colorado, when I’m not sitting behind this keyboard writing about it.

However, I don’t see my brother-in-law that often because his job isn’t as easy as it sounds, and I’m mired in the mountains of Colorado by all the stuff that makes me an adult. So, when we get together, it’s usually over the holidays. And when we give gifts, they’re usually marijuana-related (I’m sure you saw that one coming). If I go there, he gives me more pot than a person can handle, but that’s understandable given that he has a whole terraced mountainside to play with. And when he comes here, I sit him down at my dining room table and spread in front of him a panoply of pot and paraphernalia. I give him edibles and concentrates and the best marijuana in Durango, and we frolic through it virtually, getting high throughout the holidays.

For the record, there’s absolutely nothing wrong with using marijuana to celebrate the holidays. Alcohol usually gets all the attention thanks to hot-buttered rums and spiced wines and eggnog that’ll blur your vision, but that stuff just fills you up and slows you down, and one drink too many will put the “regret” in “season’s greetings” (it’s in there, I think). That’s why I like getting high instead. I like the way the Christmas lights sparkle and multiply with a head full of sativa haze; I like the way decadent food tastes richer during a deep Indica body high; I like the way a houseful of relatives becomes bearable thanks to any sort of marijuana. And above all else, I love the fact that gifting marijuana for the holidays is legal.

But it hasn’t always been this way. I’ve known my brother-in-law for nearly three decades, but we’ve only shared a few years of legal gift giving. Once upon a time, I’d have to give him pot the old-fashioned way, lowkey while the older relatives were snoring on the couch, too stuffed to notice. We’d have to smoke it outside in the cold Alaskan harshness, and then we’d sneak inside, hoping that grandma’s potpourri would cover the smell of our pot. However, none of that matters now, because pot is perfectly legal. If you feel like it, you can stuff stockings with cannabis, wrap boxes full of bud, or put your mom’s bourbon balls to shame with a box full of infused turtle brownies. These are wonderful times.

And this year, I’m stepping things up a little bit when my brother-in-law comes to town, because at The Greenery, we’re selling marijuana gift sets all throughout the holiday season. Yeah, that’s right, you can now walk into a dispensary and get a gift bag that’ll be appreciated for sure, because marijuana will make merry any Krampus, and it’s the one gift you’ll give this year that you know for a fact won’t be returned (and not just because it isn’t legal to do so). Anyway, we’re offering seven different gift sets, and here’s the breakdown:

1.) Flower Flight. Just like a flight of craft microbrews, this set runs the gamut. It includes 1 gram of CBD rich marijuana (like our CBD Mango Haze, which is just as festive as it sounds), 1 gram of our house-made Caviar, and 3 grams of your choice. This set will run you between $78.58 and $82.86 before tax, depending on flower choice.

2.) Sativa Flower Flight. Remember, Sativa is the strain that gives you energy, and this set would be perfect for Christmas morning. It’ll run you between $57 and $63 before tax depending on your selections, and you’ll get 4 different grams of the best Sativa flower on the planet.

3.) Indica Flower Flight. This one is the antithesis of number two, but for the same price, you’ll get four grams of deeply relaxing Indica, all bagged up and ready to give to that certain someone who needs to chill the hell out for the holidays.

4.) Sleep Gift Set. This one is $85.20 after tax, and it includes 1 LucidMood Sleep (which is an awesome, preloaded vape pen), 1 Magic Buzz Sleep (a single-serving infused drink with melatonin), 1 Indica MarQaha Tincture, and 1 Indica pre-rolled joint (which contains 1 gram of nighttime flower).

5.) Relax Gift Set. This one is $78 after tax, and it includes 1 LucidMood Relax, 1 single-serving infused hot chocolate with marshmallows, 1 box of Dixie Relaxing Mints, and 1 Indica pre-rolled joint.

6.) Party Gift Set. For $86.40 after tax, you’ll get a two-pack of Toast slices, 1 sucker (the flavor is up to you), 1 pack of Clockwork infused coffee (one of these days, I’m going to write an entire post about how awesome marijuana coffee is in the morning), and 1 Caviar pre-rolled joint. Seriously, this gift set is aptly named.

As a bonus, if you come in and buy one of these sets for someone, we’ll throw in a $1 pre-rolled joint just for you because you’re so thoughtful (between you and me, there’s no way we’ll know if you’re buying the gift set for yourself, because who’s to say you don’t deserve it?). Of course, there are limitations and restrictions, so please come into our store for details (sorry for sounding like a commercial).

And finally, for the first time ever, we’ll also be selling loadable gift cards at The Greenery. Yes, actual gift cards you can load with any amount, just like the ones you get at coffee shops, but ours are better, you know… because “marijuana.” How cool is that? Everyone I know always seems to end up with a stack of plastic cards after the holidays, usually ones that’re only good for eating out or shopping online, but now, one of those cards will actually buy its recipient marijuana, as long as that recipient is 21 years or older with a valid ID. Like I said, these are wonderful times.

Anyway, this Christmas, I’m going to buy my brother-in-law the Flower Flight gift set. I’m going to walk in and pay for it, let one of our knowledgeable budtenders pack it up in a discrete brown paper bag with green tissue paper (just like they’ll do for you), I’m going to put a tag on it that says “to you, from #2,” and I’m going to smile like a winner when he smokes what’s inside and is forced to admit that Colorado pot is simply better than the west-coast stuff he grows in the woods. Sure, my gift set is going to come with an “I told you so,” but yours doesn’t have to.

So please, come in and see what I’m talking about. This year, any of our friendly budtenders can help you find that perfect gift for just about anyone, because We’re Your Best Buds, and we do the holidays right. 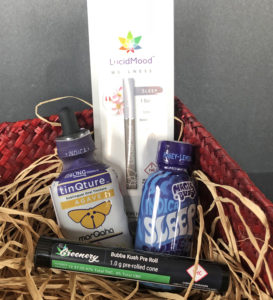