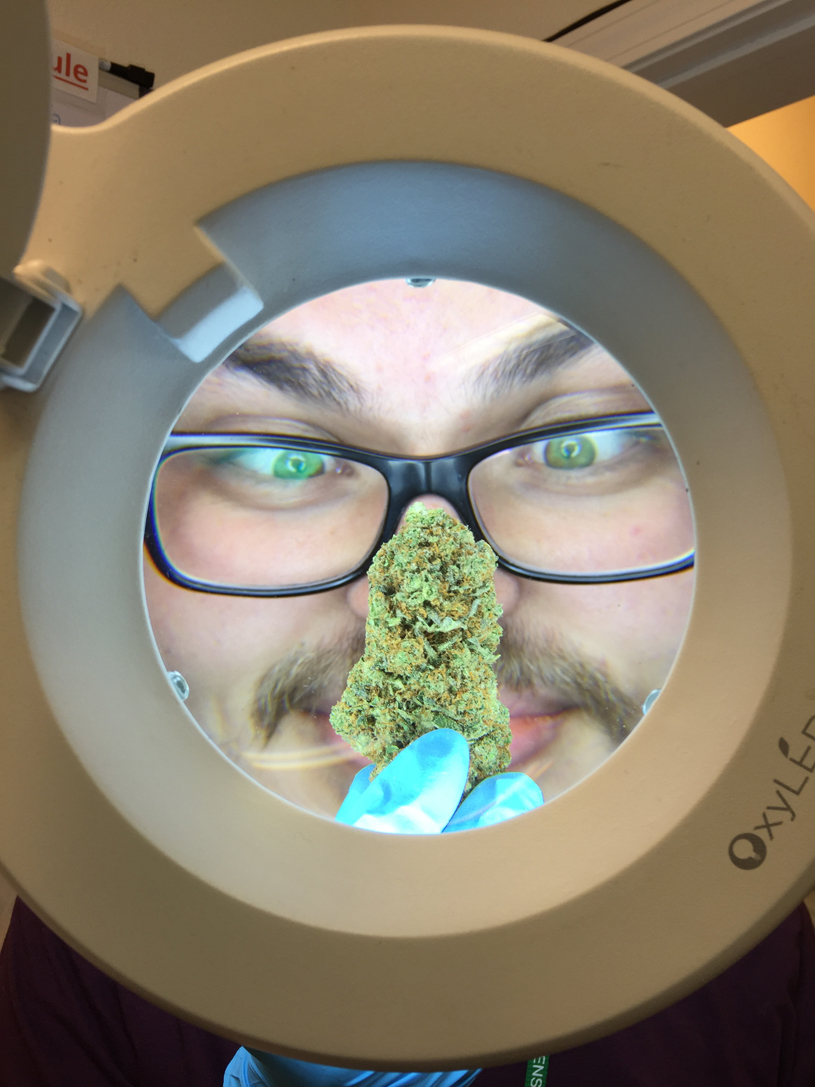 November’s Best Bud of the Month

If you’ve purchased flower from The Greenery, chances are, Zach held it before you did. He most likely looked at it under the huge, lighted magnifying glass that’s mounted to the stainless-steel table in our pre-weigh room. He most likely held it gingerly with those blue rubber gloves that stay on his hands always while he’s handling our flower. And then he most likely set it on one of our scientifically calibrated scales, making sure the weight was within one-fiftieth of a gram from where it needed to be, before putting it in one of our air-tight bottles, just for you.

Isn’t that odd? Someone you’ve most likely never met spent his day making sure the flower you smoked was perfect, but he did it behind the scene, kind of like that wizard at the end of his yellow-brick road. It’s true that Zach will occasionally come out to help customers when we’re busy, so there’s a chance you’ve seen his blue gloves and easy-going smile, but for the most part, Zach is the man who keeps our business cranking by cutting stems and putting buds in bottles and stocking our shelves with the best marijuana in Durango. He does it all behind closed doors in a room he keeps clean enough for surgery—this guy really does go further than most to make sure your pot is perfect—so this week, we decided you should meet him:

Q. When did you start working for The Greenery?
Zach. “May of this year. Actually, November first was my six-month anniversary.”

Q. What’s your favorite way to enjoy marijuana?
Zach. “I love our caviar. Seriously. Caviar and the bong; that’s how I do.”

Q. What’s your favorite outdoor activity?
Zach. “I like chilling in the hammock.”

Q. Tell us about your pet.
Zach. “Sadie is a fourteen-years-old Rhodesian/Ridgeback mix. She’s a descendant from the dogs bread by Dutch settlers in Africa by crossing Great Danes with local, wild dogs to fight lions. But Sadie is tiny (there might be some terrier in the mix), so a lion would probably win.”

Q. Which station do you stream while you’re working at The Greenery?
Zach. “You know I’m listening to those seventies hits all day.”

Q. What do you like most about working at The Greenery?
Zach. “I love that we’re a team. It’s awesome to be a part of this. We’re always communicating and having meetings, and we all work perfectly together: teamwork makes the dream work.”

Sure, Zach has only been with us for six months, but The Greenery just doesn’t feel like The Greenery when he’s not there. When he is, the seventies music he loves so much barely covers up the sound he and Savanna make by bickering like children who’re begging for a time out; one of the many sounds that makes The Greenery feel like home when you work here. And he’s going to be around for quite some time. He’s one of the lucky young members of this newest generation who’s settling in on the ground floor of this burgeoning industry, and he takes his job seriously, always making sure that the only thing rivaling his attention to detail in the pre-weigh room is his excellent customer service. Zach is simply a good human being with an awesome sense of humor, he’s a big part of the reason the team he loves so much works so well, and he dedicates his time to ensuring that our quality and compliance surpass the other places in town. Because of all of this, Zach Goldsmith is Your Best Bud for November. Thank you, Zach!