The Greenery Hits a Theme Song

Darth Vader is cool only because he has theme music. Granted, the lightsaber helps a little bit, as does his freaky ability to choke fools from a distance, but if it wasn’t for the sonorous, tonal music that follows Vader wherever he goes, he’d be average at best. All the other aliens in that far, far away galaxy wouldn’t even notice when he walked in the room, despite his awkward breathing, and there’s no way he could pull off that goth cape without his theme song. It’s sad, but true.

That’s why I’ve always wanted theme music. Sometimes, when I’m especially high, my brain obliges. I’ll be walking from point “A” to point “B,” and something groovy will start playing in my head. My walk will morph into a strut, and I’ll start humming “Stayin’ Alive” by The Bee Gees. The world around me will slow down and start to sparkle, and I’ll bob my head to the rhythm. And if that were to ever happen in the real-world, I’d know that I’ve arrived, because anybody who’s anybody has theme music.

Think about it. When the President of the United States steps up to the podium, he’s accompanied by brazen fanfare—an entire orchestra announces his arrival with pomp and circumstance. When Stephan Colbert steps on stage, his audience knows it thanks to his Late Show theme song. Hell, a couple years ago at The Oscars, Tom Hanks got pissed-off because the band played the Forest Gump song when he walked on stage instead of the song from whatever movie he starred in that week; Tom Hanks is so famous he has multiple theme songs. That’s just crazy. But now, The Greenery is catching up to his level, because we have a theme song too—put that in your box of chocolates, Mr. Gump.

Dexter Davis is a student at Arkansas State, an artist who goes by ICEberg Slim, and he sent us his song a few weeks back. It’s called “The Greenery,” and really, it’s just a happy coincidence; the song has nothing in common with our dispensary save for its title, and Slim has never walked through our door. But theme songs don’t just fall from the sky every day, so for this blog, at least, we’re coopting Slim’s song as our own. And the song is alright. It sounds like the type of music Shaft would wake-and-bake to—warm and scratchy, vinyl straight from the turntable, it’s an old-school stoner jam.

Listen to it here, and then come in to tell us what you think. Feel free to walk through our door humming your own personal theme song, because your best buds won’t judge you. We know exactly what it’s like having a theme song, thanks to Dexter Davis, and just like Darth Vader, The Greenery has arrived. 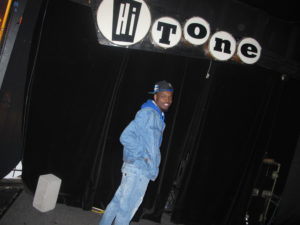 Dexter Davis, aka ICEberg Slim, at a recent performance.